I shot this buck before the days of trail cameras and he was a complete surprise. To this day, he remains one of the most massive bucks I have shot with bases that measure well over 7 inches around. This buck also reinforced the value of all day hunts. 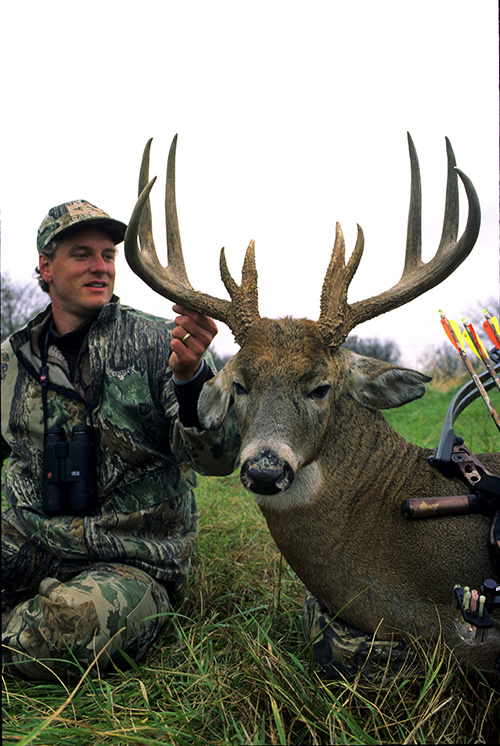 I shot this buck on November 5, 1997 after he bedded down nearby and fell asleep for at least three hours! When he woke up he came right past my stand. If I had not see him bed down, I would definitely have left the stand long before he got up and started moving.

The date was November 5, 1997. I remember it being a cool morning, sun was shining.

About an hour and a half after daylight, this buck came across the far side of the small field on the east side of the finger of trees I was sitting in.  He was following, and sometimes chasing, a small doe.  It was clear by the way they were acting that the doe was coming into estrus.

After zig-zagging around on the east side for a few minutes, they crossed the timber and headed up a slight ridge on the west side. That area was planted to tall switchgrass but I could see his antlers as they moved through.

On the top of the ridge we had planted a small plot of winter wheat. The doe went out into this small plot while the buck kept watch from back in the switchgrass.  Then the funniest thing happened; the buck bedded down in the tall grass and after a few minutes the doe drifted off to the west.

I expected at any second to see the buck jump up and give chase. I never took my eyes off the spot where he had bedded as long minutes turned into long hours!

He bedded down around 8:30 AM and I never saw another deer once that doe drifted off. If I had not seen him bed there, I would have sworn that there were no deer within 200 yards of my stand.

Being a definite shooter, I didn’t want to leave before that buck did. No telling what might happen when he woke up. Maybe I could call him down the slope to my stand.

Finally, shortly before noon, I saw the buck rise from his bed and shake off.  Then the fog of his mind seemed to clear and he instantly snapped into alert mode as he obviously remembered the doe he had been following.

Immediately, the buck went into search mode, like a dog working a pheasant slough. He disappeared to the west over the ridge only to reappear on my side, nose to the ground, working for all his might to find the doe’s scent trail. 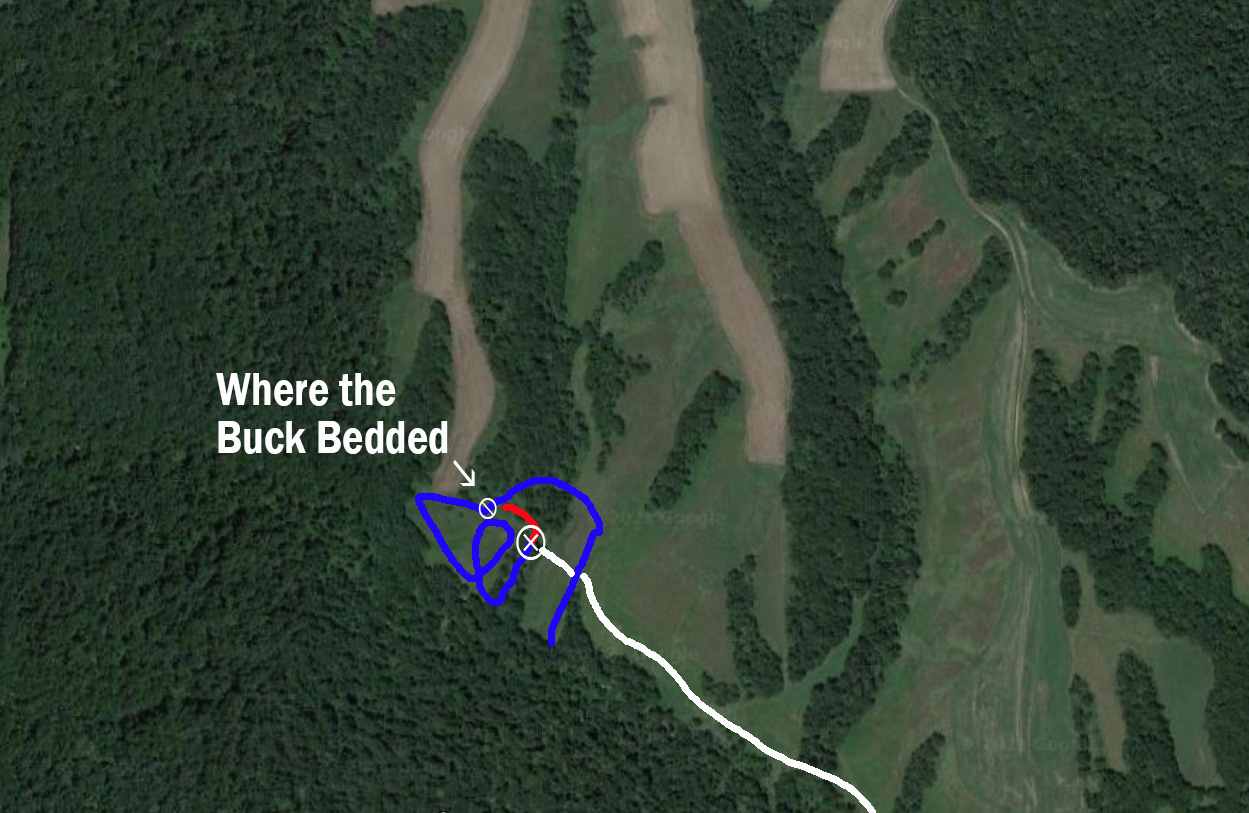 The white line is the route I took to the stand. The blue line is the buck’s path before and after he bedded down. Red is, of course, the blood trail. This was my favorite stand for the 9 years that I hunted this property. I saw and shot several great bucks from this spot.

For the next ten minutes he was in and out of my sight to the west as he kept up the search. Finally, I heard a crunch behind me in the narrow finger of trees and turned in time to see him chasing a doe straight toward my stand from the south.

I quickly snapped my release on the string and shot him as he slowed down when passing my stand. The range was less than ten yards.

The hit was good and he tore off into the switchgrass and fell within a few feet of where he had been bedded most of the morning.

He was so big bodied (the biggest bodied buck I have ever shot) that I had to get help loading him into my truck. It was all two of us could do to get him into the back even after field dressing him.

The biggest lesson, and the one that has stayed with me for the rest of my life, was the fact that if I had not seen him bed, I would have climbed down and left at least an hour before he started to search for that doe. I wouldn’t have gotten that buck.

You never know what is bedded just over the next ridge or behind a nearby patch of cover that might get up and start moving at any time during the day.  It was a definite eye-opener to the fact that we need to hunt all day during the rut.

You never know what is happening just out of sight that will soon spill in your direction.