My strongest memory of this buck was the weather. We had a prolonged warm spell in November that year with 80 degree days fairly typical. 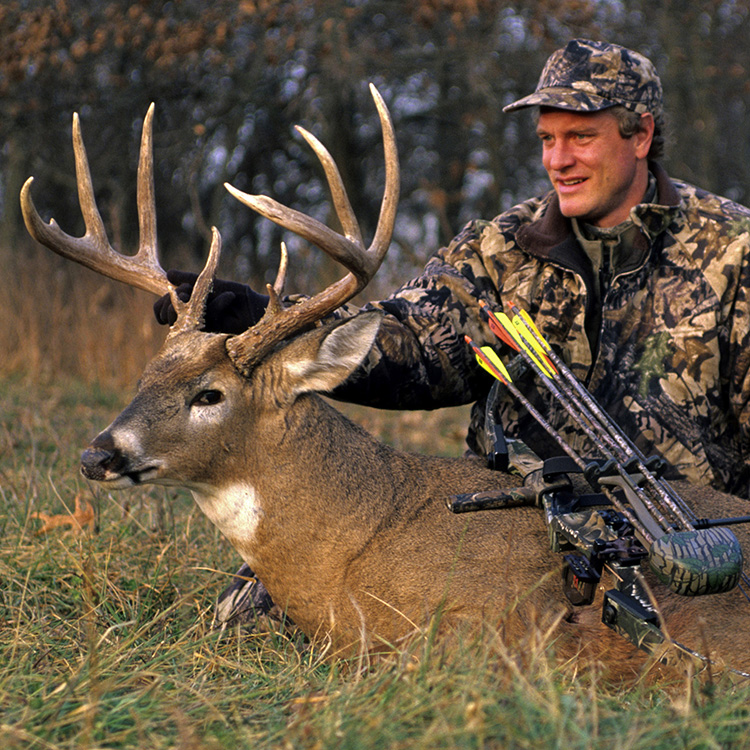 I killed this buck during a prolonged warm spell in mid-November. It can be really tough to find success under these conditions. Mornings tend to be better than afternoons when it is this hot.

The day I killed this buck it was 75 degrees on November 18, when the average high for that area is 45 degrees. That weather pattern really hammered the daylight buck movement. All the action was over by an hour after sunrise.

I shot him on a long bedding ridge in the middle of a huge 500 acre tract of solid timber. He came through alone shortly after daybreak.

I remember he was about 30 yards away and I made a bleating sound to stop him for the shot. Instead of stopping, he turned and walked straight toward the stand. This was this second time in my life I had that happen.

When he finally stopped to look around, he was just 10 yards from the tree. I didn’t concentrate well enough (sometimes we can take those close ones for granted) and hit him a touch back.

He didn’t know what happened and bedded down behind a log only 40 yards away. There was a strong southwest wind so I had some background noise to cover my movement.

I climbed down and snuck close enough for quick finishing shot. It was the best buck I saw that entire season.

The white line is my entry route. I used a ditch between two ridges to cover my movement and noise and then climbed straight up to the stand at the very top of a ridge. The SW wind blew my scent off the top of the ridge and over the heads of deer on the downwind side. The buck was just cruising by and when I stopped him for the shot, he actually turned to come closer to investigate the bleating noise I made. The blue line is course and the red is where he ran after the shot.

There were two main lessons from the 1999 season and from this buck.  First, when it is hot, the mornings tend to be better than the evenings.

The rut still takes place, it just occurs during the night when the temperatures are at their coolest.  That activity overlaps slightly into the daylight hours of morning, when it is still fairly cool.

By afternoon, the temperatures are unbearable for a deer. They wait until after dark to start moving. Think about it this way; if you were wearing enough clothes that you could lay down on snow for hours and not melt any of the snow (the buck’s winter coat) how much would you want to run around if it was hot out?  Not much, I wager.  Same for the deer.

So, the amount of overall movement is reduced and what there is takes place mostly at night. You may find the deer bedded down low in cooler spots along ditches and creeks during the day, but overall, the activity is reduced and there is little daylight movement.

Again, mornings are your best bet and staying close to doe bedding areas is the strategy of choice.