THE PROBLEM WITH SWIRLING WINDS

This buck was the last one I shot before I completely stopped hunting down in narrow valleys and ravines.  Even though the hunt ended in success, I spooked a ton of other deer that day. 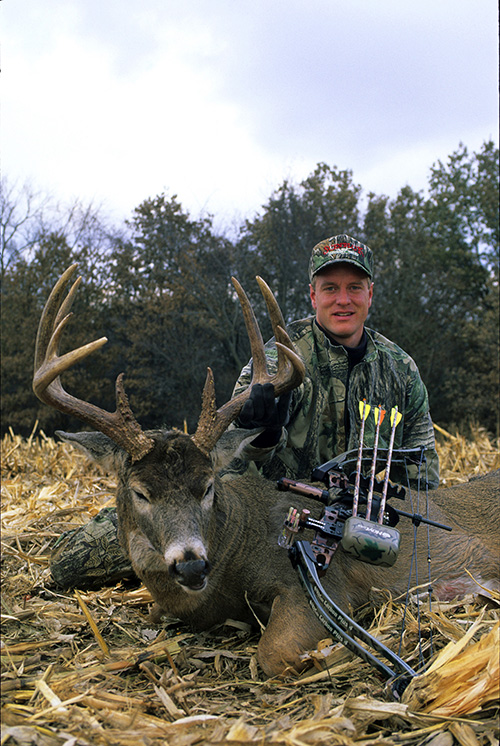 Despite swirling winds in the valley where my stand overlooked a heavy ditch crossing, I got lucky and was able to kill this buck. However, I spooked so many deer that day that I vowed never to hunt such spots again.

I remember this day best for the lesson it taught me about deer hunting, but I will leave that for the end of this blog and focus, for now, on the action.

My stand hung 20 feet above a dry wash at the bottom of a ravine.  In most whitetail country, these ravines are cool and damp and the soil is usually black and easily eroded.  That was the case with this spot. And also, like most such places, there were heavily worn trails across these dry washes at the points where the banks of the wash were gradual enough to invite crossing.

If you look at a creek or dry wash, you can tell even without being there, where these crossings will occur.  They occur in the middle of the S-shaped curves between bends in the creek or wash. In these spots, the banks aren’t cut by turning current and so they are more gradual.  This is where the deer cross.

So my stand was guarding one of these heavy crossings.  The soft earth showed every track.  Even modest deer movement leaves a trail in these places and the crossings are so obvious and tempting that when you see them you can’t help but want to put up a stand.  Surely, every buck within a half mile must be crossing here!

That lure tempts you to make a very common deer hunting mistake – and it caught me for sure.

Using the wash for cover, I snuck to my stand early in the afternoon and took up my watch.  The wind was blowing about 10 mph that day and I remember fearing that it would likely swirl, but I was hoping that I might get lucky anyway.

All afternoon, deer in every direction from my stand smelled my airborne scent and snorted at me. The swirling wind was killing my hopes. None of them got close enough to even attempt the crossing.  I was about as discouraged as you could be in a tree stand when I looked up to see a nice 10 pointer walking down the very bottom of the draw, following the other side of the dry wash.  He obviously hadn’t smelled me, seemingly the only deer in that entire timber that hadn’t. 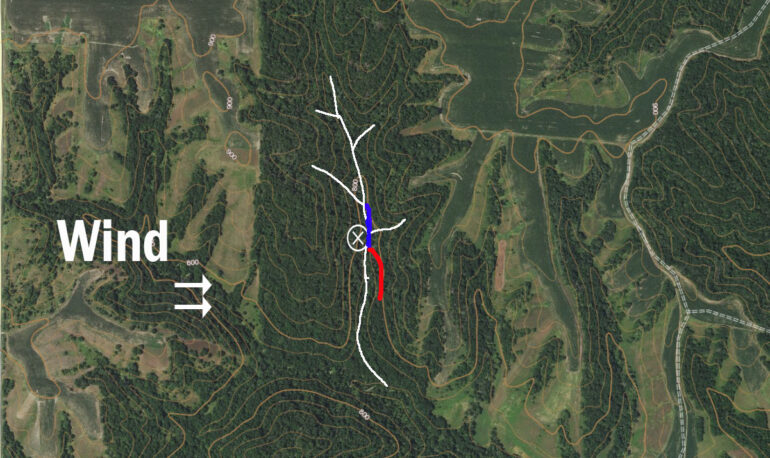 Whenever the wind blows over the top of a ravine or narrow valley, it will swirl down into this protected space. My stand overlooked an awesome crossing on the dry wash in this valley but every deer, except the buck I shot, smelled my scent and snorted at me. I was very lucky that day, but the lesson was not lost – don’t hunt anyplace where the direct flow of the wind is blocked by terrain or you will experience swirling.

The timing of the wind swirls and gusts must have been just perfect to keep my scent away from him. Not wanting to tempt fate a step farther, I took a 22 yard broadside shot as the buck paused on the other bank – well before he got to the crossing.

My hit was a touch back so I snuck out the opposite direction from the one he ran and decided to leave him until the next morning.

When I came back at first light, I found him only 50 yards farther down the draw from where he disappeared after the shot.

First and foremost, I learned that no matter how tempting the sign, those stands in the valleys will kill your season.  If you educate the deer in your hunting area that you are after them, they will stop moving naturally in daylight and soon you will be completely out of the action.

Even though I killed a buck that day – and a nice one – I decided to never again hunt down in a narrow valley. I will hunt those spots occasionally from blinds that contain my scent, but my discouragement that day was a significant lesson to avoid such spots from a tree stand.

It is much better to hunt those same bucks on the ridges nearby than to sit over the obvious sign – with its swirling winds – down in the valley.

The second lesson was less obvious. That buck tasted terrible.  I had left him out overnight even though (as it turned out) he had died fairly quickly.  I ate him, but man, he smelled and tasted bad.  Now, whenever I fear that a hit was not quickly fatal, I make every effort to come back during the night to recover the buck as soon as I think he has died.

Too many people are content to leave them lay overnight.  That should be your last option, and then only if you think it will take that long for them to die. Leaving them out overnight is not a good idea when it comes to meat quality.

As soon as you think they are dead, it is time to get after them even if it is 1:00 in the morning.