I shot this buck in late October of 1996 hunting with Gary Harpole at Harpole’s Heartland Lodge in Pike County, Illinois.  Interestingly, Stan Potts and his wife Brenda were both working for Gary at the time and helped me blood trail this deer.

I drove down during the summer before the hunt and hung some stands. I do remember that when I went back to hunt, my best one had been stolen, probably by one of the neighbors who didn’t like the fact that an outfitter was operating next to him. Or maybe Gary had to kick him off land he used to hunt all the time.

It was Gary’s first year and the idea was for me to shoot a buck and then write about the hunt and help to bring attention to his business.

I did a few of those kinds of hunts back then, but mostly for other big game as I rarely hunted with outfitters for whitetails. I liked doing it myself. 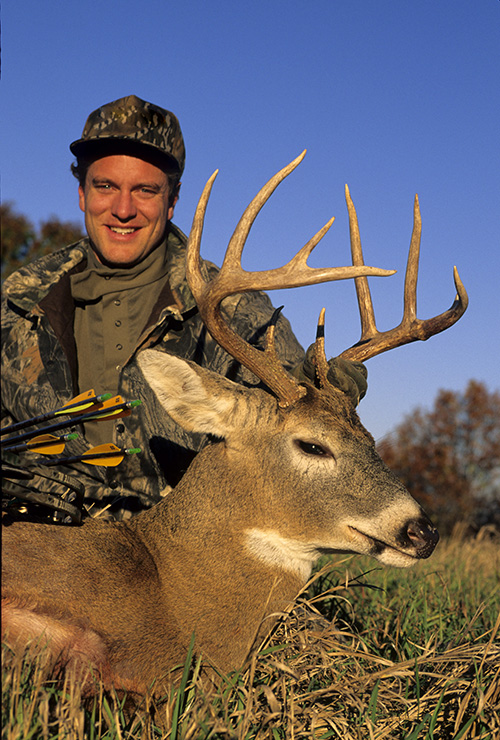 I killed this buck in late October while hunting in Pike County, IL. The buck was walking at 15 yards when the arrow hit him, and he never even reacted to the shot. He didn’t even break stride!

It was a morning hunt and the buck came through about two hours after sunrise just waltzing down the middle of the draw.  I would assume he had crossed the open ridge from a draw on that side and was using the draws to keep out of sight while looking for does.

He was a young buck (very likely 2 years old), but I also was getting close to the end of my hunt and if I didn’t shoot something, I wouldn’t have much to write about, so I took the shot.  It was about 15 yards and I used to take those close range shots while the animal was walking.

I had good success that way, but after we started filming I stopped all the bucks because people thought it was unethical to shoot them moving.  If the shot is close and the deer is walking at a normal pace, the shot is very easy to make. I used to practice moving shots all the time.

Again, prior to filming my hunts, I used to cut only small shooting lanes – more like windows – or none at all. I had openings everywhere and there was no problem getting shots, I just didn’t want big wide lanes that would call attention to my stand. I was pretty conservative on the width of my lanes.

It was easier to time things and take the walking shot in the middle of these holes than to try to stop them perfectly in the small openings. I knew to trigger the shot as soon as the shoulder appeared beyond my sight pin on a 15 to 20 yard shot.

I was just a touch late on this one and hit the buck through the back lung/liver region. He didn’t even react. He never stopped walking nor did he even break stride.

He turned left and walked out into the open field behind me. Once he got into the clear and I got another arrow loaded, I grunted and stopped him at 40 yards for the second shot. I missed that one high, having misjudged the distance in the excitement. 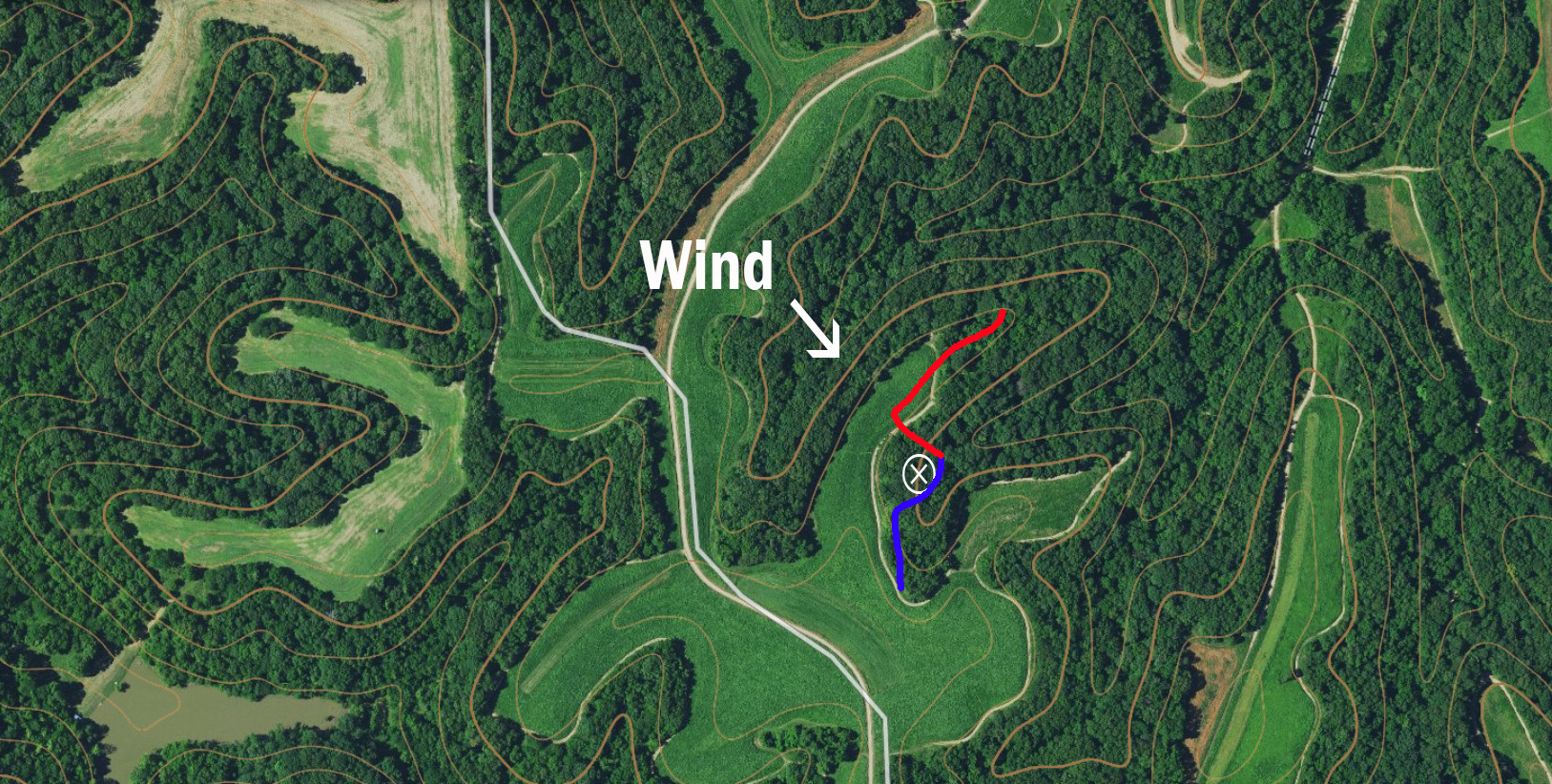 I believe the buck was crossing the open ridge and used this draw to enter the timber on the east side as he cruised along looking for does.

The buck was more afraid of the second shot that missed him than the first one that hit him.  He turned and bounded down into the timber.

I had never shot a deer before (or since) that didn’t react at all to the impact. Maybe the fact that he was walking and I didn’t make any sound to stop him made it possible for the hit to go undetected. I remember having to think back really quickly after the shot to make sure I had actually hit him and that I wasn’t imagining things.

After giving him four hours, I went back with Stan and Brenda to find him just a short ways into the timber.

Strangely enough, I guess it is possible to pass an arrow all the way through a deer and not have them realize they are hit.  Strange experience.

Second lesson relates to the walking shots. I still think that if you take the time to practice these, a steady walking shot at close range is a viable option and is a good choice when the openings are small.  Just aim for the shoulder and release the string.

On longer shots (past 15 to 20 yards) you will still need to stop them and take your chances with openings because past 20 yards, the required lead and timing are much harder to predict.