The buck I killed in Kansas in late October of 1995 is the classic example of the perfect entry and exit route. It was the first stand I ever hunted that set up this well.

Creek bottom hunting in open terrain like that found in northern Kansas is the ideally suited to this style of approach. It is much easier to find foolproof entry and exit routes here than most anywhere else I have ever hunted, but the concept applies no matter where you hunt.  I will go through how this one worked. 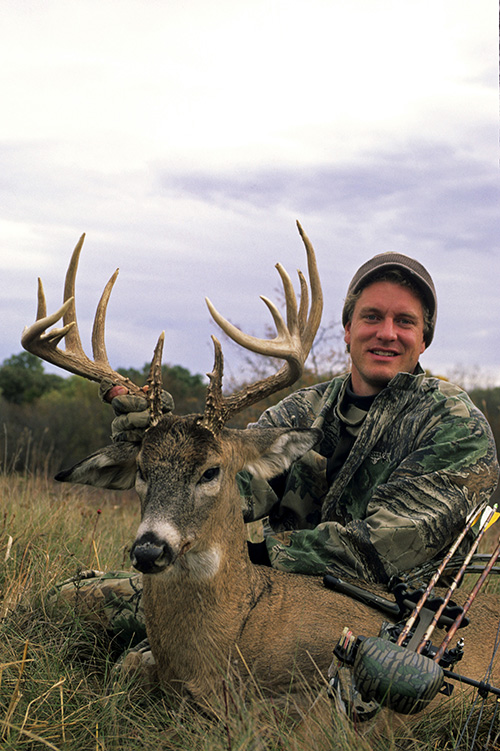 I shot this buck in late October of 1995 while hunting in Kansas. The buck’s small body fooled me and I thought I had shot a real whopper, but when I went to recover the deer I was shocked with how much his antlers shrunk on the ground. The small body had made the antlers look huge.

The stand itself was right on the bank of the creek in a spot where the bank was high and the deer didn’t cross.  The creek was a slow moving with stretches of water that were quite deep, but there were some shallow spots where the banks were low and that is where the deer crossed.

Any wind out of the west (SW, W or NW) would take my scent out across the creek and into the open field to the east. It was winter wheat the year I hunted it.

I parked on the gravel road to the east and entered along the fence line where I came to a low bank in the creek.  I then took off my hunting boots and put on chest waders. After tying the laces of the hunting boots together, I slung them over my shoulder and dropped down into the creek and headed upstream.

The water was about three to four feet deep in the creek along this stretch, but by sticking close to the far bank (west side) I would stay completely hidden under the high bank and did not have to deal with the deepest part of the pool.

The stand was about 50 yards upstream from the spot where I entered the creek and when I reached a point directly under the stand I climbed up the bank using the roots of that tree for hand and footholds.  Once at the base of the tree I took off the waders and put on my hunting boots and stashed the waders down over the side of the bank hung on one of those roots.

As I said, it was the perfect entry and exit route. No deer could see me or smell my ground scent and once in the stand my scent blew away from the deer on my side of the creek to the other side where almost no deer went.  If you look at the cover, it is all on the west side. That is where all the deer were living – upwind of my stand. 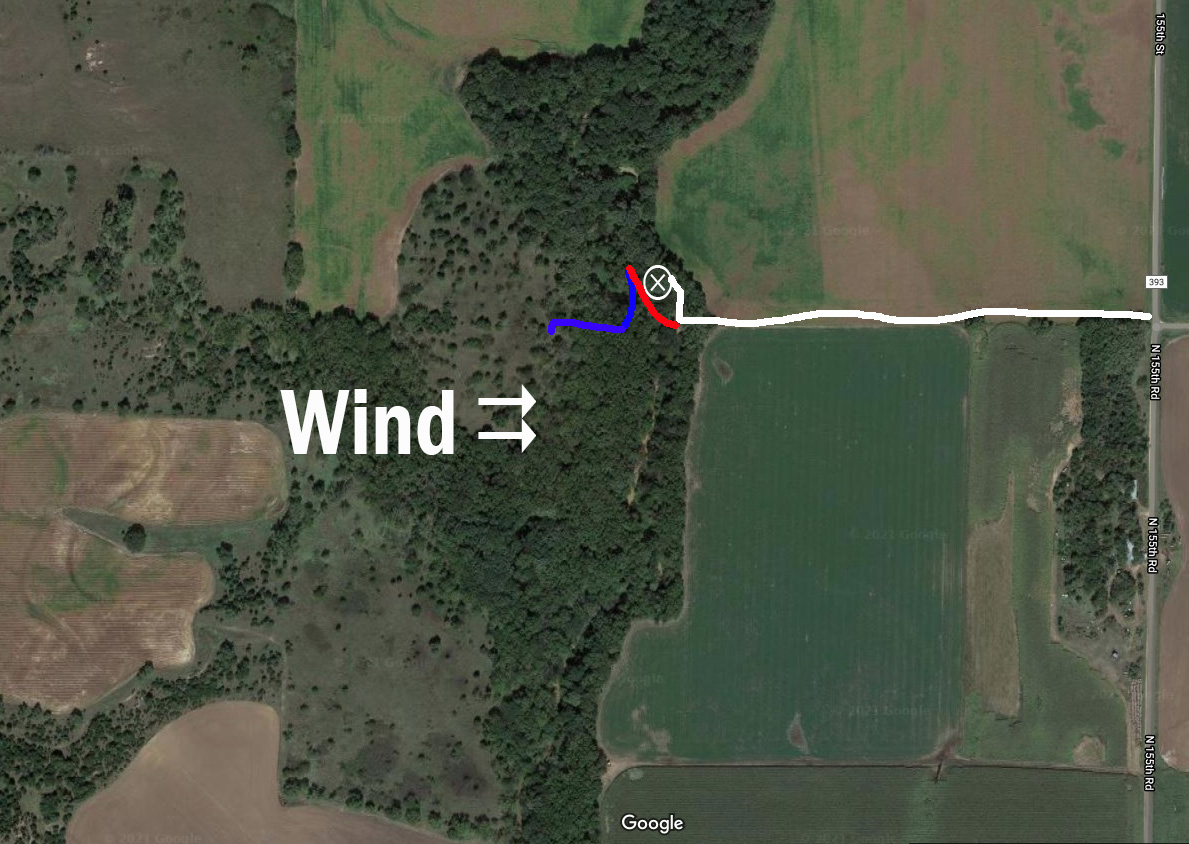 I approached the stand from the east (white line), into the wind. All the deer activity was on the other side of the creek and by dropping down into the creek in waders, I could slip right to the base of the tree without any deer seeing or hearing me. With a west wind, my scent blew across the creek to an open field where very few deer ever traveled. It was the perfect setup. Blue line is the buck’s approach and the red line was his blood trail.

There was still a lot of cover on the trees in late October and I only caught glimpses of the buck as he darted around to the west and then quickly approached my stand.  I was struck by how big his antlers looked and was really pumped when he stepped into my small shooting lane for a 15 yard shot.

I made a good hit and he took off toward the south.  I lost sight of him immediately.

After waiting about an hour I climbed down to go get my friend Rod to come and trail the buck with me. Upon reaching the low water spot where I had entered the creek, I found the buck lying there, part way in the water. He had only made it about 50 yards.

My first reaction on seeing the buck was to wonder who had come and taken my buck and replaced it with this one. Dead serious.

Literally, it crossed my mind that somehow in that hour someone had swapped bucks on me.  The one I found lying at the crossing was way smaller of antler than the one I shot.

Then, I looked at the body size and realized that this was one of the smallest bodied bucks I had ever shot.  After gutting him I could literally pick him up and carry him rather than drag him, that is how small he was.

The small body made his nice rack look like a giant as the buck approached.  With the limited cover of the October timber, I had not gotten a good enough look at the buck to realize it was just a very young deer with tremendous antler genetics and huge upside potential.

I was proud to shoot the deer, as you should be with anything you legally harvest, but that ground shrinkage was a good lesson for me at a time when I was just learning to focus on the age of the deer I was shooting rather than just their antler size.

Two lessons, that would seem obvious from that hunt.

First, there are some spots that present perfect entry and exit and give you a complete wind advantage while on stand.  You can hunt those stands as often as the wind is right without any fear of ever burning them out. I could have hunted that spot every day the wind came from the west, southwest or northwest.

It was easily the most bulletproof stand I had ever hunted and became the prototype for all the stands I tried to find after getting back to Iowa.