As I last left the story, we had acquired roughly 400 acres of our own land and still owned 1/14 interest in a 3,600-acre partnership roughly a mile away.  We had two loans on the 400 acres (one with a bank on the original 125 acres and one with a private individual on the next 275 acres).  It is time to buy more!

BUYING OUR THIRD AND FOURTH PROPERTIES

Two more neighbors consented to sell to me at more or less the same time in 2005.  We were still carrying the two loans so I didn’t want to borrow a bunch more. I had a decision to make.  Should I sell the share in the partnership to buy more land outright or keep the share and be happy with the land I owned? 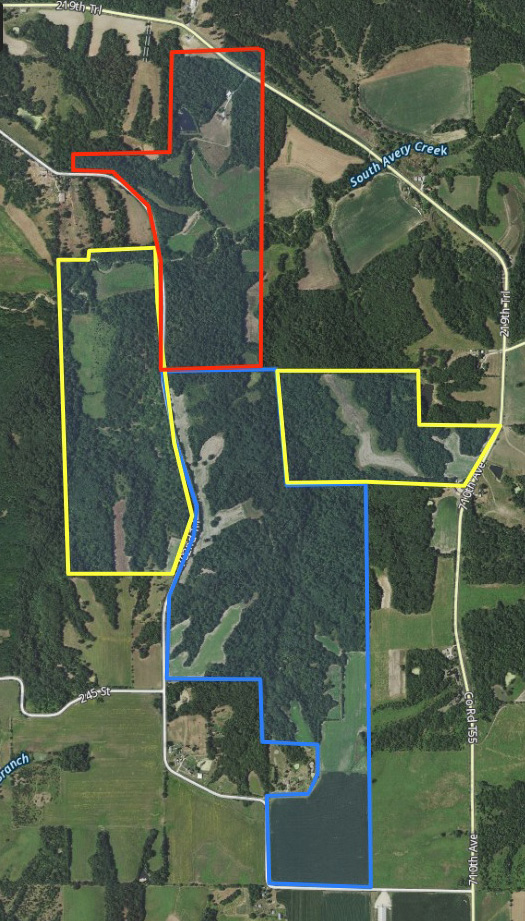 Here you see the Home Farm after I added the third and fourth pieces. I had to sell part ownership in the large corporate farm nearby to afford to buy the two pieces in yellow.

As I mentioned in Part One, I really liked owning the land myself versus within the partnership. For sure the partnership served its purpose – and I am glad I did it – I learned a lot about hunting land management, about working with people, killed some nice bucks and made some great friends.

But I decided it was time to move on. I would sell the share and use the proceeds to pay for the two additional properties bordering the home farm.  Those two properties combined to form around 200 acres that I ended up paying $1,600 per acre to buy – roughly $320,000.

Interestingly, the husband and wife who owned one of the properties needed a new mobile home. The one they were living in had gone to ruin.  Somehow, I can’t remember exactly how, I bought them a new house as part of the deal, and they had it delivered and moved into it before the land deal itself ever closed.

That’s just an interesting twist that shows how varied these deals really are.

Unfortunately, a share of stock in a sub-chapter S corporation (the structure used for the land partnership) is not considered the same as land, so I wasn’t able to do a like-kind 1031 tax exchange with the proceeds of the share sale.

I had to pay capital gains tax on the roughly $170,000 of profit. That meant my $250,000 produced just a bit over $200,000 after paying the taxes. This was one of the downsides of the way the partnership/corporation was structured.

Had it been a simple partnership or possibly even a well-structured LLC, I could have done a 1031 exchange after selling my part of the ownership. That’s something to consider if you ever pool your money with buddies – get a good accountant involved early.

You can’t count on someone buying something you have to sell quickly, just because you want to use the money for something else.

I had to push the sale of my share pretty hard to get it sold in time to meet the purchase deadlines for these two other farms.  Again, God provided the means.

I was still way short of the capital needed for the full $320,000 to buy these two properties. We did have some savings by this point, but not much. Maybe $10k or $20k.  I had to find an additional source of cash to pull this off.

Fortunately, by now the banker was getting comfortable with my land buying and, more importantly, with my commitment to making the loan payments on time.  He came up with the cash and we closed on 200 more acres in mid-2005.

So, to bring this story up to date; we started with the house and original 125 acres in September of 2002 and now in the summer of 2005 we are up to 600 acres all in one block, but we no longer own the share in the partnership.

The fun is just beginning. 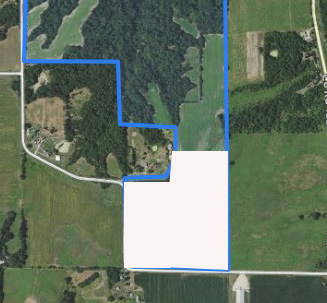 We sold the 40 acres of open farm land off the far south end of the Home Farm (shown in white on this image) in order to raise more capital to buy additional investment property.

I didn’t want to sell any of the farm but there was no other way to keep moving otherwise.  On the very far south end of the property, part of the 275 acres I bought in 2004, was a flat 40-acre crop field of really good dirt for that part of southern Iowa.

The cash rent I was getting on that field wasn’t much compared to what it was worth, so during the summer of 2006 I decided to sell it and use the proceeds from that sale to buy more hunting land.

There wasn’t any more land for sale bordering me, or even near me, but I knew eventually someone else would sell and I wanted to be ready when that happened.

I decided to sell the 40-acre crop field at a good profit compared to the average I paid per acre for the 275 acre farm and do a tax exchange to purchase investment land.  I would hold that until I found something else near the Home Farm.

It was my way of keeping the snowball rolling and growing.

I sold those 40 acres for roughly $85,000 to a neighboring crop farmer.  I had to survey it out, but that was no big deal.  The challenge had to do with the loan.

I had to get my friend Jack to release those 40 acres from the collateral that I had used to secure the loan from him.

Jack wasn’t big on doing that at first because no lender likes to see their collateral reduced without seeing the principal of the loan reduced too.

Plus, I had bought that farm with very little down in the first place.  So, I had to show Jack that the remaining 235 acres he held as collateral had grown enough in value that the loan was still solid.

To his credit, Jack finally OK’d the deal and signed off on the sale of the 40 acres. 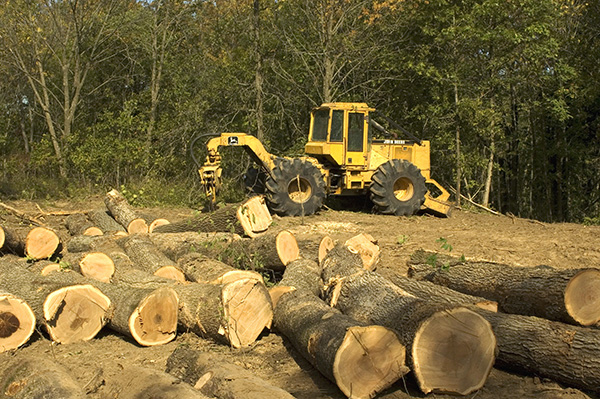 At the same time that I was selling the 40 acres of crop land, a logger harvested timber off the Home Farm. Logging brought in additional capital that I planned to use to buy investment land.

At the same time, I brought in a logger to harvest some of the mature timber on the 235 acres of that farm that remained.  He focused on oak and a few walnuts and paid me roughly $60,000 in the end.

I am not sure if that was a good deal or not, I somehow don’t think it was.

I will go into some of what I learned about selling logs in later installments of this series – and in a later dedicated Land Blog.  It was my first taste of timber harvest and it did produce another $60k that I desperately needed to keep rolling.

Again, timing is everything, so as all this was happening, I had been actively looking for something to buy.

Timing is key if you are going to use tax exchanges. I will write a future Land Blog on this topic, but the 1031 is a very powerful tool when you are building your dream. 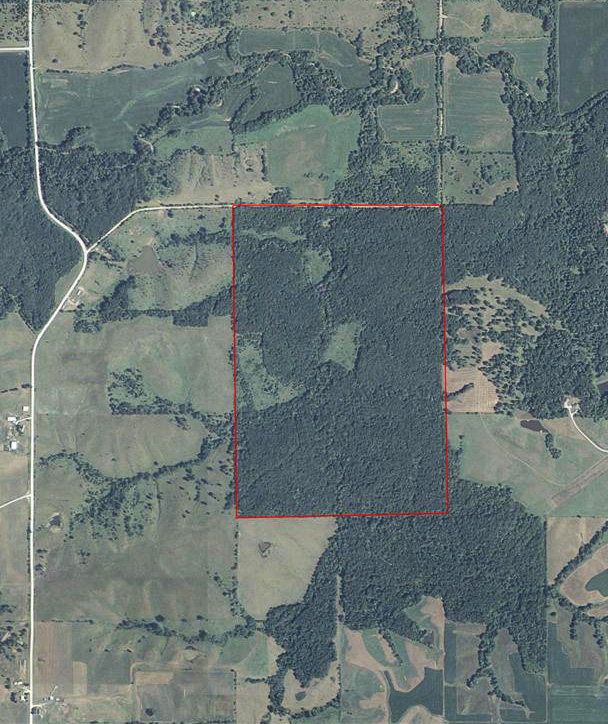 The fifth property we purchased was an investment farm located about an hour west of our home. I really loved this property. In fact, I seriously considered keeping it long-term. The road bordering it on the north side is dirt. The property was very secluded and already had big deer on it when we bought it.

By now, every spare dollar I could come up with I funneled toward land purchases.  Prices were going up consistently and tons of people were now entering the land investment game.

I remember a kind fever that existed.  People were buying big farms sight unseen off aerial photos rather than risk having someone else jump in and grab the property.

This swell in demand was just ramping up and I could feel it very tangibly through the number of people who called me and asked me if I knew of any farms for sale.

February 2007: I knew that anything I bought that was not very close to the Home Farm had to be a good value because I would eventually sell it and use the proceeds to buy something closer to home.  That was the goal.

If you want to own a dream farm, you need to own land so that you are in the game with something to sell when the right piece comes along.  So, purchase number 5 was an investment property.

The fellow that had logged the Home Farm knew of 240 acres that was for sale about 60 miles away. That property had a good bit of mature timber on it.

It was not loaded, but there was enough walnut that if I could buy it right, I would come out OK in the end even if land prices didn’t keep going up.

The logger turned me onto the property with the expectation that he would get to cut it shortly after I bought it.

Actually, it was two properties, a 160 piece and a contiguous 80-acre piece owned by a different family member.

I started working on this 240-acre property simultaneously with the start of my negotiations to buy an island – more about that in the next segment.

I planned to use the proceeds from the 40 acres of farmland that I sold as the down payment for the 240-acre purchase via a 1031 tax exchange. 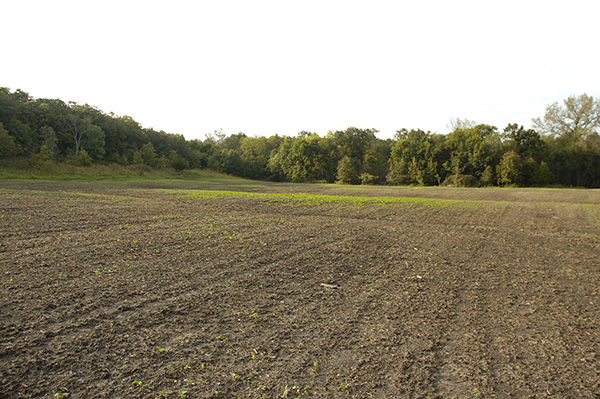 I cleaned up this field to make a large food plot set right in the middle of the 240-acre tract of mostly timber.

Given the two different owners of the 240-acre tract, I made simultaneous offers for both pieces and I made both offers contingent on getting the other one.

In other words, the offer I made on the 160-acre piece was contingent on also getting a signed purchase agreement on the 80-acre piece and vice versa.  That served two purposes.

I really wanted them both and didn’t really want one or the other separately because there was no fence between them and the trail system through the timber zig-zagged through both pieces.

Plus, I felt that the two family members would work together to get it done much faster if I made the offers contingent.

It worked like a charm and I was able to get both of them for roughly $1,600 per acre.

It was an absolutely gorgeous 240-acre tract. It was nicer in many ways than anything I owned near our home, but I still knew I would sell it if something closer to home came available.

However, my love for this property does serve to illustrate a key point about investment properties.

Don’t buy something to resell that you aren’t completely happy keeping forever.  I was very proud of that property and knew it would sell easily when the time came.

The local bank was starting to really warm up to me by this point and my banker was quick to finance the bulk of the purchase. (Remember, I sold those 40 acres to make the down-payment.)

So, keeping up with the story. We now own 800 acres in two different locations an hour apart with three loans.  Those payments hanging over my head forced me to work even harder at my day job of writing and photography.

Thank goodness for youth because I was really grinding now.   The pressure was on.

I am still a long way from the end of this story, but will get there eventually.  So rather than drag Part Two out any farther, I will jump to the next installment where I sell the logs off the 240-acre property and buy an island!  You can read Part Three here.