I recently published a blog about the buck I shot last season and how I used a creative way to keep from running into deer when I was going to and coming from my stands. I slept on the ground near my afternoon stands at night so I didn’t have to alert any deer going out that evening, or coming back in the next morning.

Getting in and out clean is at the very heart of successful deer hunting. If you can keep the deer from knowing you are hunting them, you have a great chance for success.

After hearing my story on a podcast, a fellow named Joe Stader, from Wisconsin, sent me an e-mail with his own version of my strategy. I really like how creative Joe was and how hard he worked. Joe definitely was not using a traditional approach, nor the easiest method.  He was doing what had to be done to keep the deer from knowing he was hunting them, which in turn kept them moving naturally. Right off the bat, Joe was able to shoot a really good buck. Here’s how he did it. 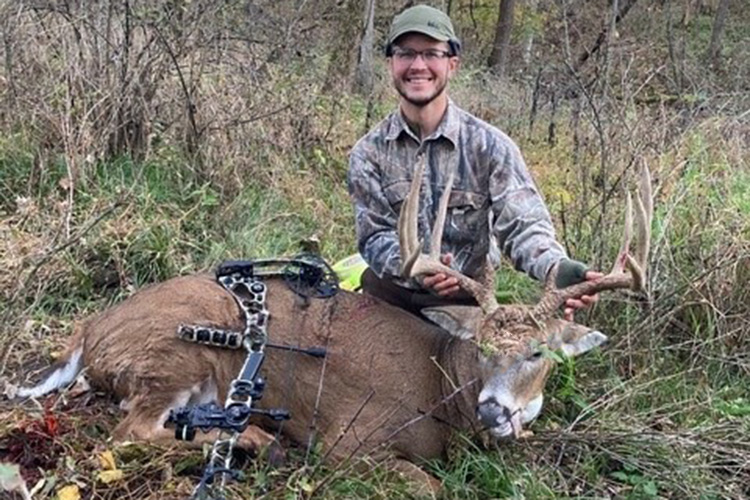 Joe Stader shot this buck last season in southwest Wisconsin using a very creative hunting strategy. He canoed into his spot and then slept on the bank of the river so he wouldn’t have to spook deer coming and going to his stand.

In Wisconsin we have access to one buck tag, which I was fortunate enough to fill on October 23 last season. I have been fortunate to hunt a 150 acre farm about 12 miles from my house. The piece of land is an excellent habitat for whitetails, however, it is landlocked. The only way you can get to it is through easements which make access possible.

The caveat with the access from that direction is that I bump deer in the fields on my way to the property in the morning, and visa versa on my exit in the evening. I had some reasonable success each year, but was not killing the most mature bucks that were daylight active on my trail cameras. ACCESS was the issue. 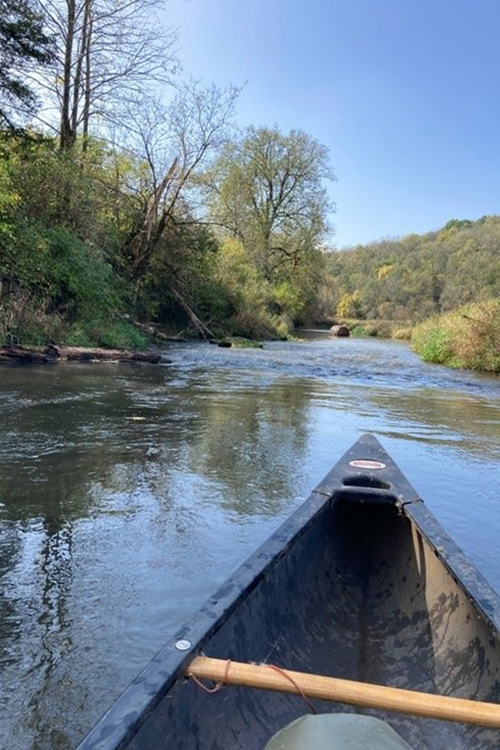 This is the small river Joe canoed down to reach his hunting area using the “back down” – the direction opposite from where the deer feed.

Since 2018, I have been canoeing down the river to access the hunting property from the ‘back side.’

This back door approach has improved the number of mature buck sightings, as well as successful hunts, harvesting 5+ year old bucks each season since that time. I love the adventure and increased enjoyment of access using the canoe, but this does add a large amount of effort and time to each hunt.

For my setup, I would place my canoe and gear at the bridge (north end of the property) – where the road intersects the river – the night prior to hunting. The following morning, I would park my truck at a bridge which was about 1 mile south of the property that I would hunt. I would then ride my bicycle 4 miles in the dark to my canoe. Then I would canoe down the river, hunt, and when I was finished hunting, canoe down the rest of the way to my truck after dark and then drive back and get the bicycle.

For the 2021 season, I decided to add a new dimension, so that if I wanted to hunt multiple days in a row, I would not be spending so many hours each day , before and after dark, preparing for the next day’s hunt. I generally start hunting in mid October, when there are cold fronts that come through.

In early October, I always do a ‘dry run’ with my canoe, just to make sure the river pathway is clear, and to find out where any low spots, snags and downed trees may influence my route. During my dry run this past season, I placed a waterproof bag containing a bivy sack, some food, sleeping bag, and mat along the shore in a spot where thought I might be able to camp. 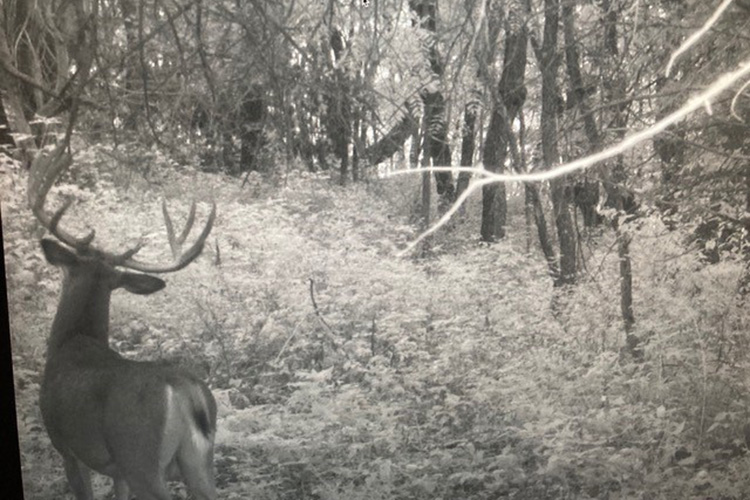 Joe knew the buck was in the area from trail camera photos he was getting of the deer. The big ten pointer was the motivation Joe needed to try a very creative hunting strategy.

There was a very solid 10 point that I knew was in the area – that’s the buck I really wanted. My first hunt was on October 22. Instead of driving my truck, I road my bicycle the 12 miles from town at around 3:30 AM to get to my canoe. I sat from sun up to sun down. I then snuck down the hill to where my canoe and camping gear were stashed along the river.

I slept right there in the bivy sack, and got to my stand more than an hour before sunrise the next morning. The day started off reasonably slow, with a few does and small bucks filtering back to the bedding area from the fields. Around 9 o’clock, the large ten point I was after hit a scrape about 50 yards away, and bedded down.

There was also a doe that was bedded 12 yards off to my left. This buck, and doe, stayed bedded for just shy of 2 hours, during which time I had to be very careful, more so not to spook the doe. The buck stood up, and actually starting walking in the opposite direction. I hunt from a tree saddle, so I carefully rotated around the tree and grunted one time. He looked my direction but kept eating acorns. 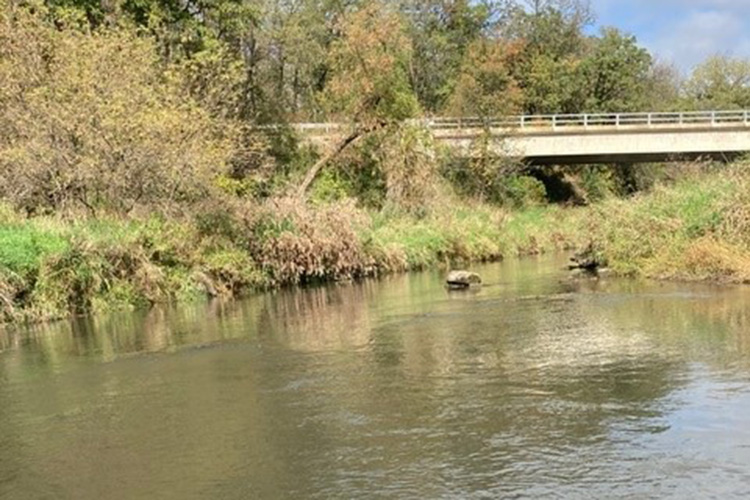 Leaving his canoe stashed at this remote bridge gave Joe the tool he needed to slip quietly into his hunting area using the backdoor.

Five minutes later, he came into bow range at 20 yards and I placed a good shoot.  His death run took him over a small hill so I didn’t see him go down.  After climbing to the ground a short time later, I canoed out to the lower bridge where my wife came and picked me up.  We were able to drive back in and quickly found the buck only 80 yards from my stand.

I did not know this at the time, but it sounds like a few people in the neighborhood knew about this buck, after sightings in the summer. I cannot overstate how important the unique access to this land is to my success. It is what put me into position to tag such a nice animal.

That is an awesome story of a great buck. I am not sure which part impressed me more: sleeping out on the edge of the small river or riding a bike 12 miles at 3:30 in the morning to get into a canoe.  I am not sure I would have gotten that far out of my comfort zone. It just shows that you do what you have to do to be successful.

The most important rule of hunting mature bucks: you can’t kill them if they know they are being hunted.  Joe’s story is an inspiration.