What Trees to Cut for Timber Stand Improvement

Hi Bill, I am looking to do some timber stand improvement on our family farm here in Iowa. I know that TSI can be very complex, but believe I am up for the challenge. I have been following along on your website here and have already learned a lot and can't begin to explain how helpful your content is. I trying to dig in a little deeper into the topic, do you have any good resources that you recommend? Any books, websites, video series, etc... that you have found the most beneficial over the years? I believe one of the more difficult aspects of TSI is just species identification. Any tips on that? Thanks for your help! Lucas

Topic: What Trees to Cut for Timber Stand Improvement: 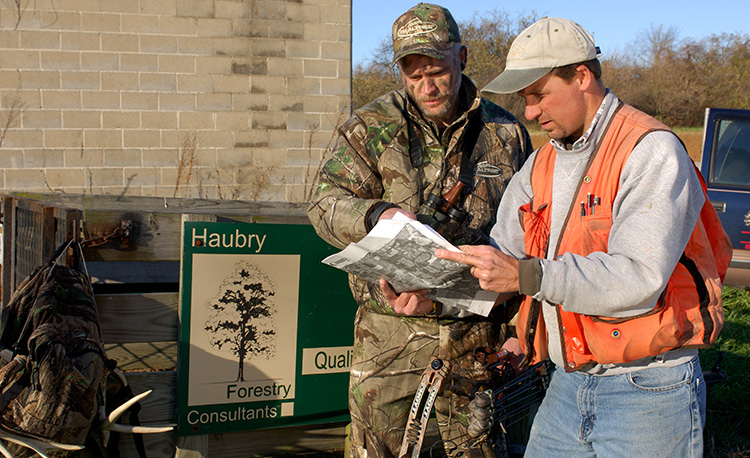 Timber Stand Improvement is a key aspect of general and specifically whitetail hunting land management. But, as important as it is, you need to enter the process very carefully. It is best if you are not 100% sure what you are doing to hire a consulting forester or try to get the state district forester to come to your property and mark a small TSI cutting. You can learn from them and learn as slowly start to implement their suggestions.

I never relied on a specific source of information when I set out to do TSI.  There wasn’t much at the time (if any).  My first project was in 1998.  That was on a farm I co-owned.  Not much had been published on the subject back then.

The district forester marked the trees to cut with the goal being strictly forestry related.  Pure forestry goals usually result in less trees being removed because the forester only releases specific trees by removing competition directly surrounding those individual trees.

He is not at all focused on overall habitat improvement and will walk right past areas where there aren’t any crop trees to release.

That might be an over-generalization as today’s foresters (especially the younger ones) are very likely more in tune with hunting related goals. But back then, foresters had no feel at all for my goals.

But, it was a starting point. I got to see how the forest responded to those cuttings in a very low risk way. I was impressed with how the habitat around those released trees improved in just one growing season.

Then in the early 2000s, I started buying my own land (no partners).  I didn’t have to “get permission” from anyone to be aggressive and focus on hunting related habitat goals. Even though my goal was to cut a lot more trees than a forester would have marked, I did start slowly – the first year we only did about 10 total acres (at the most).  I then looked at that area the next summer to see how the habitat responded and then adjusted how many trees we cut and did another 10 to 20 acres the next year.

After a couple years of this, I had a pretty good idea how the habitat would respond and then I hired a larger crew and they hit it hard over the next two to three years and did the entire 800 acres of timber on that farm.

The main thing I learned (unfortunately, the hard way) was the importance of identifying existing problems first.  In other words, if there was an invasive species trying to make a go of it under the canopy of junk trees and then you remove those junk trees, those invasive species go wild.

I had that happen on three or four sites with a total of around 10 to 20 acres and it really bugged me that I didn’t see the problem and fix it first. I now have a very deep hate for invasive species.

I should have treated the invasives first and focused my TSI in other areas until I had them subdued (it can take a few years to clear them).  That would have saved a huge problem later when those plants (mostly bush honeysuckle in that area) took off.  Controlling invasives is at least as big of a priority as deciding which junk trees to cut. Do an online search under “Invasive plants Iowa” to learn what to look for. Here is an example.

They are all bad, but some are worse than others. Autumn Olive and Bush Honeysuckle can destroy a woodland if they get going wild. Garlic mustard is another one to eradicate first, if possible. Despite its name, Tree of Heaven is really bad too.

Once you find areas that have invasives, do a number of searches to determine the best ways to eradicate them. In most cases it will call for glyphosate after other species are dormant (usually in November) or cut and squirt the stump with something like Tordon or Garlon.  Either way, it will take a few years to really get a grip on those areas.

Believe it or not, I have actually looked at farms and walked away from the prospect of buying them because the understory was thinly scattered with bush honeysuckle.  Any TSI work to improve habitat on those farms would have resulted in disaster. Regardless of how good those neighborhoods might have been for deer hunting, I didn’t want to deal with that problem long-term. That’s how big of a deal this is.

I would suggest asking your district forester (Iowa has one or two for each management district) to come and mark a small TSI program for you.  There might even be government cost share in the actual cutting of the trees.  Go with when he/she marks the TSI and ask a bunch of questions. You might mention that you not only want to focus on overall timber quality (the typical goal of TSI in the eyes of most foresters), but also habitat improvement and see if the forester will accommodate. If not, no big deal. Take what you can get.

Unfortunately, those guys are really busy and it may take a long time to get them out there to do this work.  Another option is to hire a private consulting forester (do an online search to find them) to come and mark a small area. Again, go with and ask tons of questions.  After he/she leaves you will have a much better feel for how to manage the rest of the property yourself.  Start slow.  And, do what I didn’t do and look really hard for invasive plants before you dive in and start removing a lot of the canopy.

I would suggest cutting less than you think at first, rather than really mowing the forest. You have to get sunlight to the ground to stimulate underbrush and the establishment of some of the key forest species like oak, but you can always come back a year or two later and recut the same area if you decide you didn’t take enough the first year.

As for what to cut, that is kind of a personal decision. I left all the obvious marketable timber (even if it was not a desired wildlife species).  For example, I left some big hickory trees, some big basswood (linden) and some big maples, knowing these had some value in the near future for timber harvest. Otherwise, I left almost all the oaks, walnuts and cherry (walnut and cherry because of their future timber value).

My goal was habitat improvement for whitetail hunting and that meant I needed underbrush and trees that dropped acorns. Those were my two main priorities.

Just as an aside, another thing to know about TSI is that it is not a one and done process. You will have to go back into those areas roughly every 10 years to cut out all the junk that came up when you most recently opened the canopy and is not shading the forest floor.  This process should keep the underbrush vital (what deer need) and eventually produce a good number of new isolated oak trees (assuming there were some seed trees present to begin with).

Some landowners prefer to burn these areas every couple of years to keep them in the early successional stage of regrowth, but I didn’t like the non-discriminating quality of fire (it kills all the saplings if done correctly) so I always felt better about controlling what died and what didn’t. Maybe I will change my position on that someday, but right now, I am not a big proponent of fire for most whitetail habitat.

I can’t over-emphasize the importance of being patient. Experiment with a small area first. You have time on your side. Don’t hurry this process.  Do a little, learn from it and then do more.   Good luck. (2/3/22)