How to Hunt Ridges

This blog is about How to Hunt Ridges. The buck I shot this past season offers a good example of the challenges and opportunities of hunting ridges in bluff country.  The strategies themselves are not particularly hard, but the physical execution of those strategies is where things get tough. 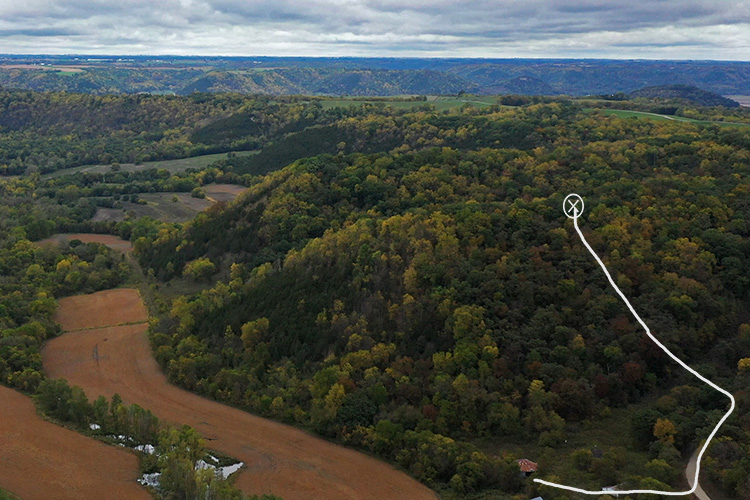 The circle shows where the stand was located and the white line is the route I took to get to it. You can see I went directly to the stand straight up the ridge slope to reduce the number of deer I was likely to run into. This same approach would also be ideal for morning hunts because it keeps me away from any feeding areas where the deer are likely to be lingering before heading in to bed.

I killed the buck on October 29, 2020 in the afternoon on a bedding ridge. This is a bit more aggressive than I like to be, as I normally won’t hunt these ridges in the afternoons because it can be hard to get in there without spooking deer when they are likely bedding on the ridge.

However, based on my trail camera photos, this buck was not making it to the feeding area until after dark and I figured the only way I was going to catch him in daylight in the afternoons was to hunt him closer to where I guessed he was bedding. Yes, risky from the standpoint that I could easily have stumbled right into him on my approach to the stand early that afternoon. 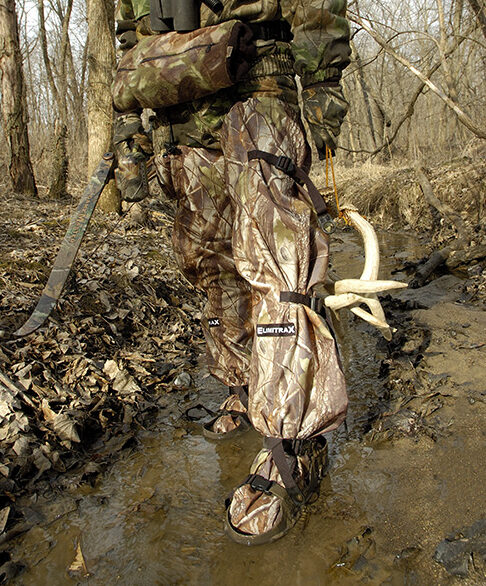 I have several pairs of these Elimitrax boots left over from the 90s when they were on the market. I still wear them at times when approaching sensitive stands to eliminate ground scent.

To combat that risk, I went straight up the steep ridge and right to the stand. I didn’t walk along the ridgetop at all, so that reduced the amount of deer likely to see my approach.

I also put on a pair of Elimitrax booties when I got to the top of the ridge and wore those to the stand where I buried them in leaves at the base of the tree.  Those booties hold in scent so that I don’t leave any ground scent near the stand that cruising deer could smell.

Scott Whitlock invented Elimitrax booties back in the early 90s, but unfortunately he is no longer making them.  There are still a few on eBay. You could use thick plastic bags to serve the same purpose, but they have to be tall enough that your pants won’t touch any brush that you rub against while walking.

The brush, several inches off the ground, is usually where the deer smell your ground scent, not where your boots actually touch the ground. You will need to wear some kind of large sandal over the plastic bags to keep from immediately shredding the plastic on the ground.  It really does work great.

Back to the strategy. The wind was blowing from the south, and the ridge runs east and west, so the wind was cutting straight across the ridge and blowing my scent out over the valley to the north.  At least that is the way it would work in theory. When the wind is steady, and not gusting, you can get away with a bit more deer movement on the downwind side of your stand without being busted as long as you are close to the slope and the deer are below you.

WHERE TO PLACE THE STAND 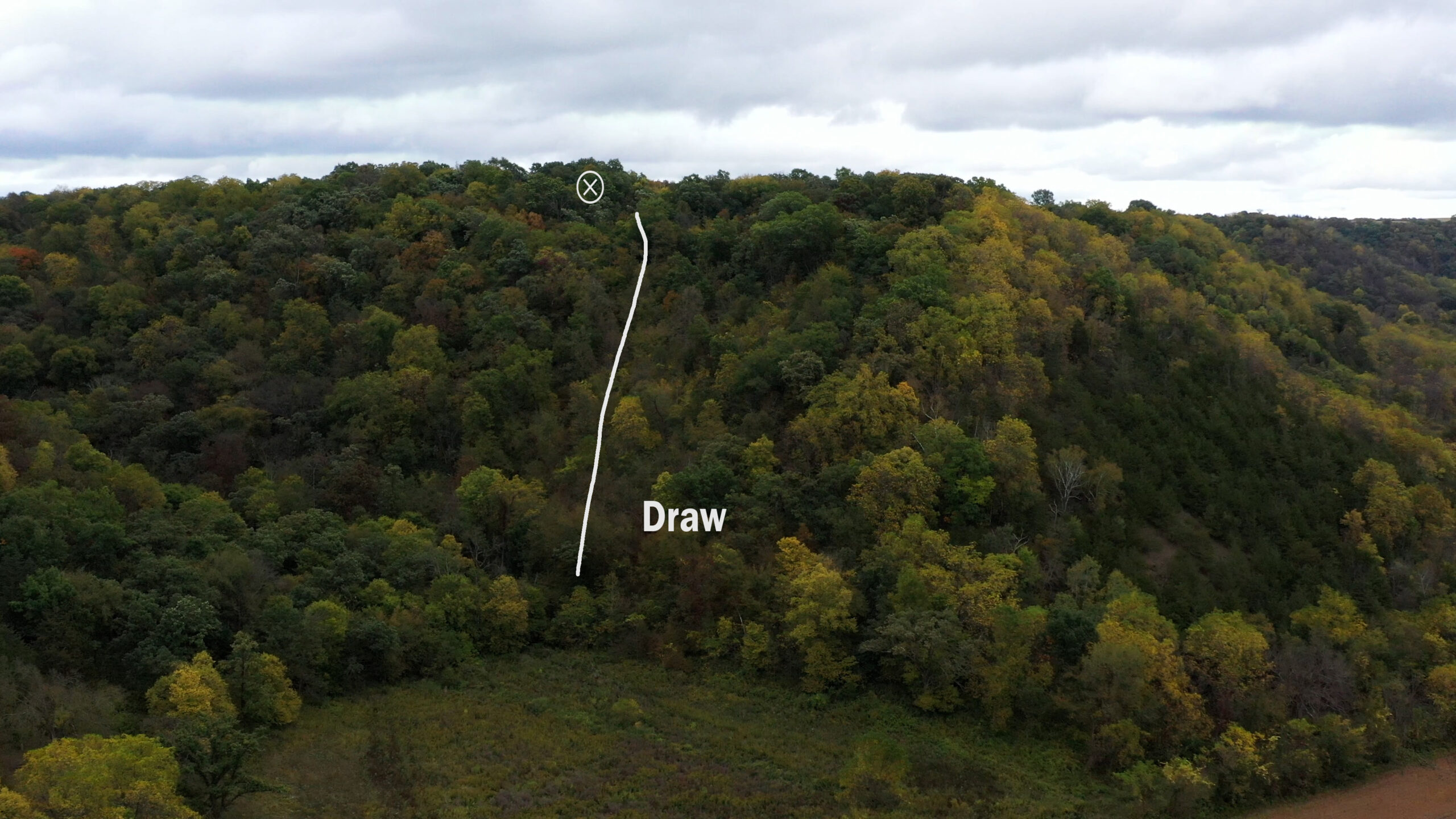 This is the backside (north side) of the ridge where I shot the buck showing the stand location and the location of the draw that runs up the slope. I like to set up near the head of a draw when possible, because this terrain feature usually creates a narrow section on the ridgetop that will bring more cruising deer within bow range.

It can be hard to decide exactly where to place your stand along a ridge.  Everything looks the same. Whenever possible, I try to place my stands where draws come up the slope from the side.  This generally creates a narrower section along the ridgetop, a sort of bottleneck, that tends to bring more cruising bucks within bow range.

In this case, I placed my stand close to the head of one of these draws. If you look at the photo I included that shows the backside of the ridge, you can see the draw plainly as a slight depression in the slope.

A topographical map would show this even more clearly. On the topo map you will see sharp curves in the otherwise smooth contour lines where the draw goes up the slope.

If the ridge you are hunting doesn’t have a draw coming up either slope, choosing a stand site becomes a bit more random and arbitrary. In that case, just select a spot toward the point for morning hunts (farther from the top fields) and toward the fields for evening hunts. This just keeps you from bumping deer when arriving at your stand for the hunt.

This is why hunting this bluff country is physically hard. To get to the best morning stands from the best direction, you normally have to do a lot of climbing.

Sometimes you will run into situations where the deer primarily feed in the bottoms.  Possibly there are no fields on the upper ridge level, or the fields that are there are pastured heavily or planted to CRP grass.  In those cases, you can (and should) approach your morning stands from the top and go out onto the ridge from there.

In the evenings you want be closer to the food, ideally on the upper level and not in the valley where the wind swirls.  The afternoon hunts are usually much less physically demanding than the morning hunts because you don’t have to climb to get to the stand. However, you will likely need to arrange some kind of diversion to move the deer off so you can get out of there at the end of legal shooting time without alerting deer.  Someone driving up in a vehicle or ATV works great. 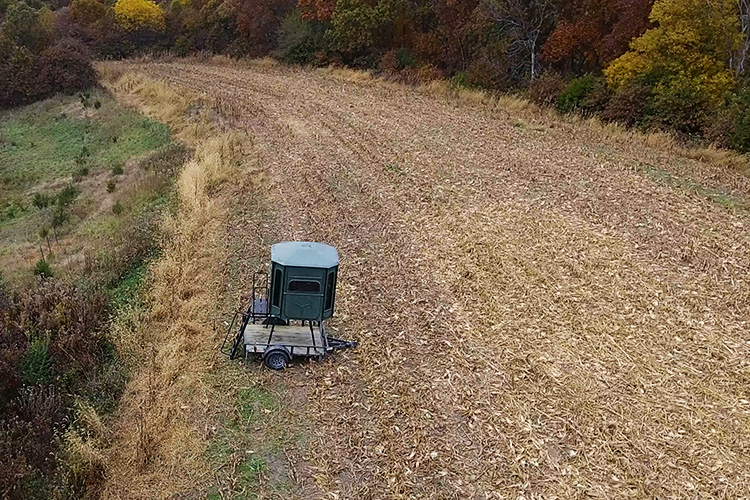 I use a Redneck Blind on a trailer whenever I hunt in places where it is impossible to get a wind advantage when hunting from a stand. A typical spot is when hunting down in valleys where the wind swirls.

If you are forced to hunt the valleys because there is no food on top, or for the simple reason that the buck you are hunting heads down the hill at dark, it is best to hunt from a ground blind that contains your scent.

I have been using Redneck Blinds exclusively because they are so well built with airtight gaskets on the windows and doors – and because I can put them on trailers and move them around as needed.  That way I can cover a lot more ground with a lot less blinds.

I will plan to come back with future blogs that go into more detail on how best to hunt rugged terrain. I gave the simple version here, but there are some advanced strategies that I have used (and will be using again), such as sleeping at the base of the tree to eliminate the morning entry!

Should be fun. Please check back for more on this subject. 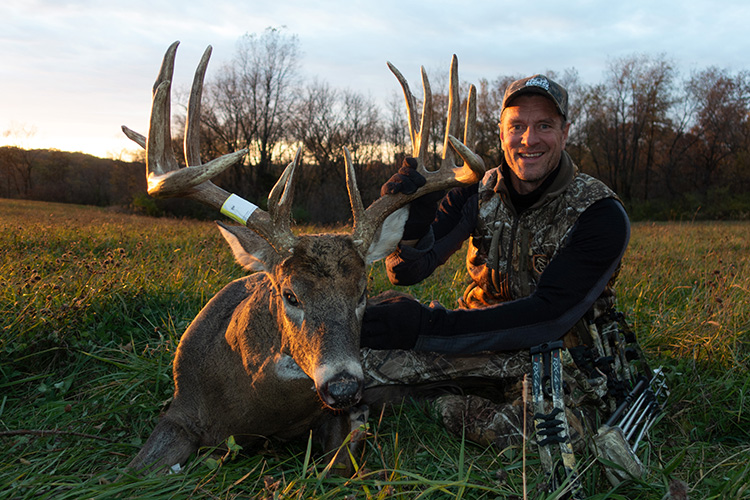 One last look at the buck. I don’t need much excuse to post photos of a deer that looks this good!