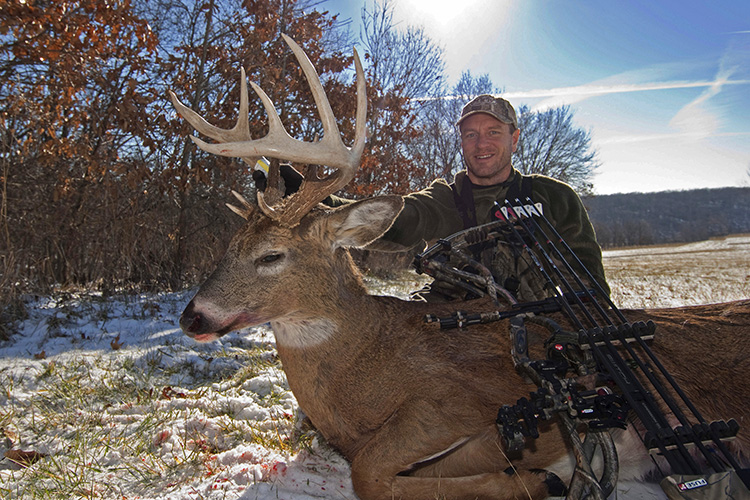 This is Loppy. He was seven years old when I shot him on December 22, 2012. I had been hunting him (more or less) for four seasons. He moved is core area roughly 1/4 mile every year and was barely daylight active during that time.

I killed two bucks in 2012 that had many things in common and many differences that made them fun to hunt and fun to study. Plus, I think it is just interesting to journal the twists and turns in their behavior.

I nicknamed the two bucks “Double G4” and “Loppy”. Not surprisingly, the names came from antler characteristics that each buck exhibited when he was young. I was aware of Double G4 when he was a 3 year old, but didn’t start hunting him until the next year. 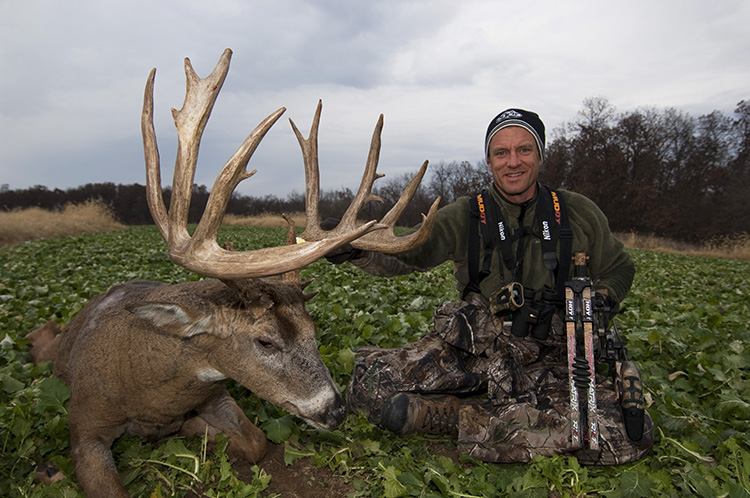 Double G4 was also seven years old when I killed him on November 2, 2012. Unlike Loppy, G4 never left home and also unlike Loppy, he was very daylight active his last two years. When they reach maturity, every buck is different and you have to learn them and hunt them as individuals.

In 2009, both Loppy and Double G4 lived on the same ridge. A few times, I even saw them on the same day. I am guessing they were both the same age that year – 4 years old. G4 was a mid-160s bucks and Loppy was just cool, not a high scoring deer.

Though I tried, I was not able to kill either one. I saw both bucks a few times and got a number of trail cam photos of them. But despite my best efforts to end it in 2009, the hunt for both bucks carried over into the next fall.

In 2010, Double G4 was still living more or less on the same ridge. He had grown into a high 170’s buck and inspired awe on the two trail cam photos I got of him that season. Loppy had moved about a quarter-mile to the west and had grown this neat multi-branching Christmas tree tine where one of his brows had been the year before. He was definitely cool. 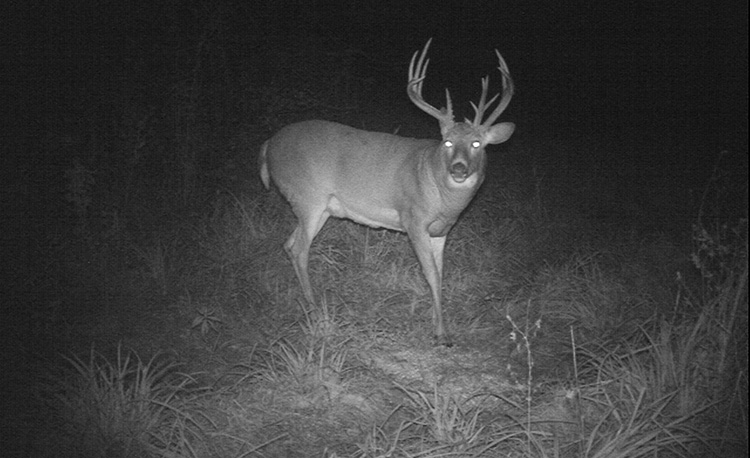 This is Loppy in 2010. I loved that cool Christmas tree he grew for a left brow tine. I never got any daylight photos of Loppy from 2010 through most of 2012 and he moved his core area roughly 1/4 mile each year.

At this time, both bucks were 5 years old. I got only a few photos of them and all the photos were at night. I know I was in their core areas, but they just didn’t move much. Though I hunted that area (and those bucks) every day that I could, I never saw either one. So, the hunt carried over for another year.

As 6 year olds, the bucks kept changing. G4 had bloomed into a monster, grossing well over 200 inches as a primarily typical-antlered buck and Loppy had lost the Christmas tree – dang it. G4 was still in the same area where I started hunting him in 2009, but Loppy had moved another quarter-mile to the west.

By moving cameras and using a system that evolved over the years (that is something I can write about another time) I was able to keep very close tabs on both bucks and learn a lot about them.

Well, Loppy remained nocturnal in 2011. We got a bit of summer video footage of him on the beans in 2011, but zero daylight photos or sightings during the season. G4 was just the opposite. Seemingly, he had done his time as a ghost and was ready for some daylight.

Imagine pulling your first card of the year and having this on it! Though I knew the deer was around, I was stunned by how big he looked on camera. I was almost afraid to hunt him again after spending the entire prior season hunting him without a single sighting. However, in 2011, as a six year old, G4 was one of the most visible deer on the farm – talk about a 180-degree change in behavior. It was amazing.

I killed another buck on that same ridge where G4 was living in November (I have two buck tags for the rut in Iowa, being a landowner). When that other buck was gone, G4 seemed to relish the sunlit open areas. He was the most visible deer on the farm. He was often the first deer (arriving even before the does) out in the afternoon to feed and would use the same area day after day.

Imagine a 200+-inch buck with such reckless behavior. He must have felt bulletproof. As a six-year-old, G4 acted more like a two-year-old. I would like to say I killed him that year, but I didn’t get it done. I had him within 40 yards three times but each time I messed up or he just got lucky. So the hunt for both Loppy and G4 spilled over into its fourth season.

As I have already mentioned, I was fortunate enough to kill them both in 2012, but again their personalities took some interesting twists. Loppy moved another quarter-mile west and G4 once again lived on the same ridge and was still highly visible. His entire range (as best I could tell) was about 30 acres.

Think about a daylight active 200 inch buck living in just 30 acres. I will never see an opportunity like that again as long as I live.

It was just a matter of time with G4. I hunted him carefully because it made no sense to hunt him aggressively – his behavior and history suggested he wasn’t going anywhere. After missing him from a blind at 30 yards in late October (I thought it was 40 yards), I killed him a few days later on November 3 about 200 yards from that spot.

I won’t say he was easy to kill – you still have to be careful to keep them from knowing you are hunting them – but he was the easiest buck to hunt that I have ever encountered.

I doubt G4 was actually dumb; to my knowledge, we never bumped him. I don’t think he ever knew I was hunting him.

So he never had a decidedly negative experience with people. It pays to be careful, but it pays even more to be lucky enough to have a buck with that kind of personality living on your farm.

OK, back to Loppy. He was showing up on trail cameras regularly but still, even after this time, it was always at night. On December 20, a big snowstorm came through and the next day was very cold – the perfect recipe for late season success.

I headed right to Loppy’s area and was very lucky when the buck came out an hour before the end of legal shooting time. It took him 30 minutes to feed his way to me, but I finally got a nice, clean 25-yard shot.

It was the first time I had seen Loppy in daylight since 2009. Compare that to the changes that took place in G4’s personality over those years and you can clearly see one of my main points – every mature buck has a unique personality and you have to hunt them as individuals.

By the time they reach maturity, every buck is different.