My friend, Ron Nemetchek (North River Outfitting) runs a hunting camp deep in the BC backcountry for Stone sheep, moose, mountain caribou and mountain goats.  His camp is located right on a river so there is also some fishing that goes largely under the radar since Ron is not a fisherman.

But, the fact that there are bull trout in that river caught my attention. I called Ron back in July to see if he could use some unqualified help around the camp in exchange for my use of his lodge to chase bull trout.  He was all for it and the planning started. 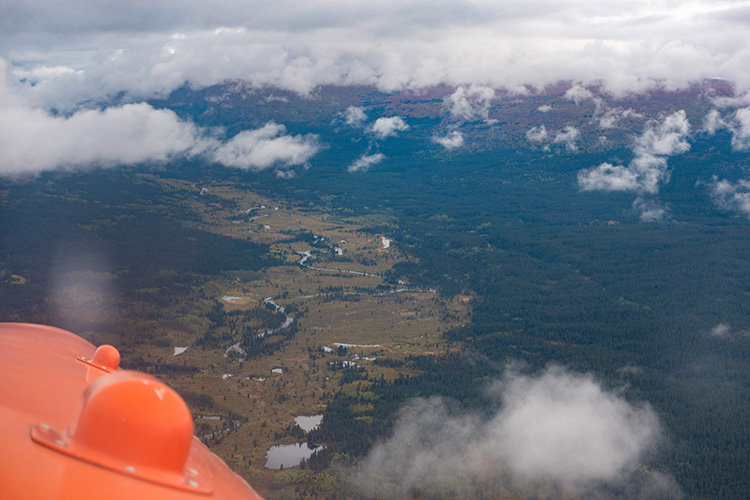 The bush plane ride into the lodge took us over some incredible mountainous country with remote valleys. The ride was worth the trip.

I had to be in Smithers, BC (almost Alaska) by 9:00 AM September 9 to catch the bush plane charter that would fly Ron’s next camp of hunters into the lodge.  Ron maintains a grass strip at the lodge so it is accessible by bush plane despite being nearly 150 miles from Smithers.

I drove up and the trip went smooth other than needing to find a way to get a negative covid test before crossing the border. It was harder than I expected and set me back a day and a half before I found a place in Helena, MT that would do the test.

I spent the first ten days of the trip “helping” hunter Peter Fair from San Francisco to shoot a mountain goat and a then try for caribou and moose.  Since I am not a licensed guide my role was pretty reduced – I was mostly there for the adventure and to offer moral support.

Peter’s guide was Santino Minto, Ron’s son and a great guy. Grizzlies are very common in this area so we carried a “bear gun” (12 gauge with slugs) everywhere we went.

Without getting into all the exciting details, I will summarize the first 10 days briefly in Part One and the post Part Two very soon. 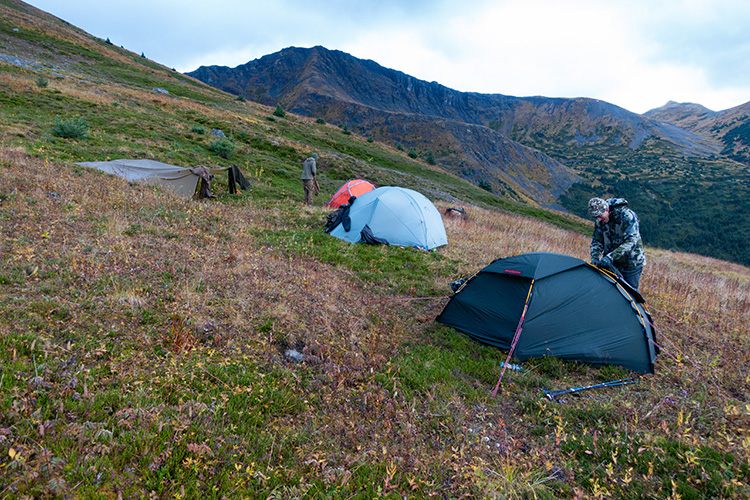 Our second remote camp was on a mountainside about a mile from where hunter Peter Fair shot his mountain goat the next day. We each had our own tent which made it easier to keep all our gear inside and dry.

9/9/21: Day One: Nice weather. Arrived at the lodge via chartered bush plane with six other passengers. Got gear together and then flew to a small lake in Ron’s float plane and set up a big tent that would serve as “base camp”. Santino and Peter flew in one at a time after me. Glassed the nearby mountains for mountain goats and caribou, didn’t see any.

9/10/21: Day Two: Climbed the mountain to the west, where Santino expected to find goats.  Halfway up he spotted a nice billy bedded on a shelf well up the mountain, too far to get to that day. We got 90% of the way to the goat and made camp on a gorgeous bench on the open sub-alpine side of the mountain. Rained most of the day. Dinner of freeze dried food. 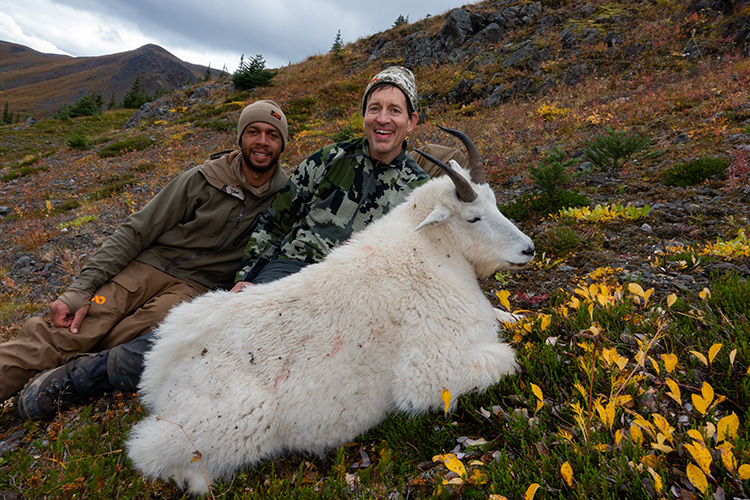 Hunter, Peter Fair, (right) and guide, Santino Minto, with the mountain goat Peter shot at 150 yards after an exciting mile-long stalk across a bare mountain face.

9/11/21: Day Three: Still raining lightly. Snuck to the top of the ridge and glassed.  The goat was still there in the same bed. He hadn’t moved with the rain and clouds socking us in.  We started a stalk that would take us down into the bowl below the billy and then up through a saddle and around the back of the mountain for what we hoped would be a good view of the bedded goat.

Nearing the end of the stalk, Peter caught a glimpse of the billy heading into the trees on the backside of the mountain below the shelf where he had been bedded.  Not spooked, just up and moving – probably feeding after all those hours bedded.  Santino and Peter snuck forward and took up a vantage point. The billy stepped out in the open and and Peter made a good 150 yard shot.

After dressing and skinning the billy, we carried hide and meat back to the spike camp and spent the night there. More freeze dried food, but we did hope to eat part of the goat the next day.

9/12/21: Day Four: Still raining. Carried billy and all our camping gear back down the mountain to the big tent by the lake where we relaxed and ate the backstrap from Peter’s goat grilled over an open fire. Wow was that good!  Ron flew in on the float plane and picked up the rest of the meat and hide and dropped off a few groceries that we ate immediately.  Freeze dried food goes only so far when you are burning 7,000 calories a day! 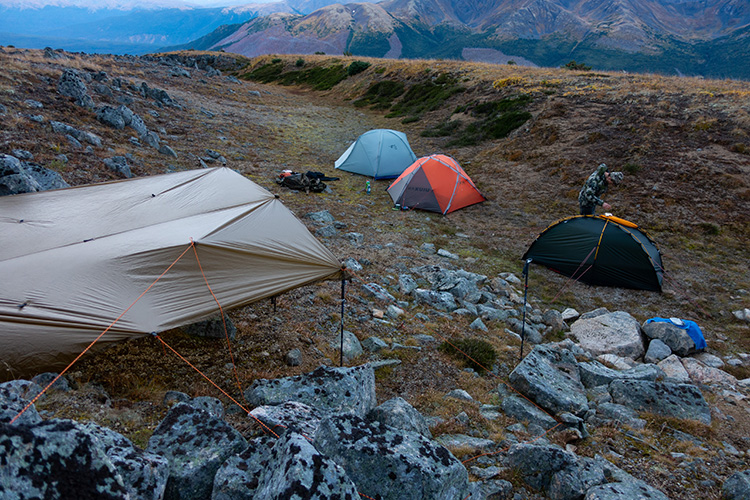 Mountain caribou live mostly on the high open ridges where you are very exposed to the elements. To get out of the wind, we elected to set up camp in this shallow draw.

9/13/21: Day Five: Time to shift gears and head up the mountain on the other side of the lake with our camp on our backs and try to find a mountain caribou.  It was windy and cold, with periods of rain and snow.  We could not catch any breaks when it came to the weather.  We reached the bare-faced top of the ridge after about six hours of climbing and then were struck with the challenge of finding a camping spot.

Obviously, we would need water so that was a priority.  Also, with the wind blowing about 15 miles per hour (with intermittent rain and snow), getting out of the wind would be nice too.  We eventually found a small spring on the wide open side of the ridge and set up camp in a ten foot deep runoff ditch out of the wind.

We spent the rest of the day glassing various spots for caribou and found only two cows and a calf.  There was plenty of sign, but the makers of that sign were notably absent.  We ate the last of yesterday’s groceries (a package of hot dogs) that we added to our freeze dried meals. 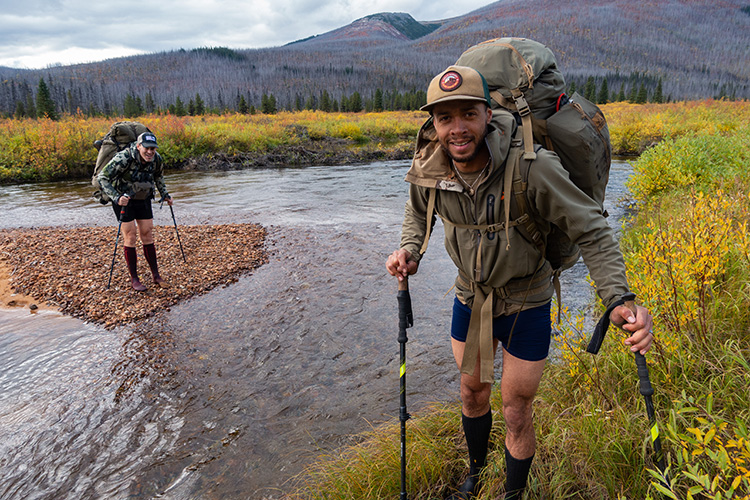 Just getting from the mountain where we were hunting caribou to our moose camp was an adventure requiring a full day hike including fording a very cold river.

9/14/21: Day Six: We got up to a heavy fog and light rain – 50 yards of visibility.  After about two hours of trying to decide what to do, we opted to drop down off the mountain to another lake about six miles away that had a rustic cabin and promised moose hunting. We decided to give up on the caribou.

Descending is harder than climbing in many ways, and it took us most of the day to get through all the dead falls, ford a small river in our undies and then follow the lakeshore to the cabin.  Once we got it cleaned out (porcupines love these cabins) we got a fire going in the stove and settled in.

Santino made a few moose calls and was instantly rewarded with a nice bull that approached the shore on the other side of the lake, grunting with every step. Santino and Peter decided it was not big enough (I would have shot it) and we went back to the cabin for another supper of freeze dried lasagna – or whatever (they all taste the same). 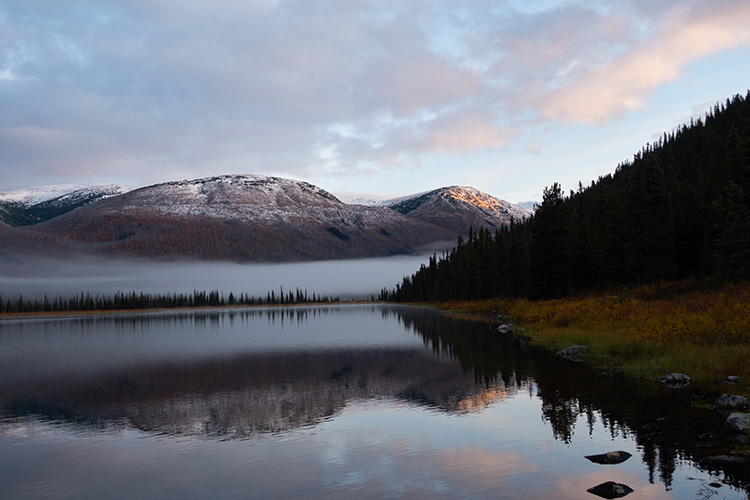 The view from our cabin on the lake where we hunted moose was gorgeous. We didn’t have many clear days, but they produced epic scenery.

9/15/21: Day Seven: Walked along the lake shore first thing in the AM, but didn’t get far before we spooked a grizzly at close range which was enough to spook us, as well. Stopped to call. The same bull from yesterday stepped out and stood along the opposite shore. Still too small.

There was a 12 foot aluminum boat and an outboard motor at the cabin that Ron had slung in by helicopter.  We got it running and headed up the river that we had crossed the day before in our effort to reach the lake, stopping to call twice along the way.  Not surprisingly, we called in the same bull.

After waiting out a heavy snow squall that swept across the valley, we cruised up the river until we hit a big beaver dam with a five foot slot of very fast water. We decided not to try to run that slot with our 7 hp motor!  Then slowly worked our way back to the warm cabin. 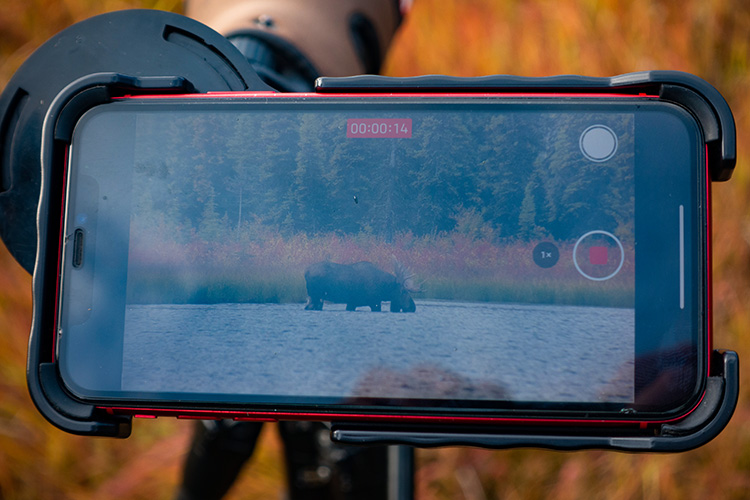 Peter and Santino decided to pass up this moose hoping for a bigger one. As the week played out, we never found one bigger.

9/16/21: Day Eight: Went farther up the shallow winding river, probably a mile, pulling over the beaver dam and proceeding upstream.  Once we stopped, we called in a small bull. He came in grunting and at first we were on pins and needles, expecting a giant to emerge. Nothing else responded. Had some fun running the fast slot in the beaver dam downstream! Feasted on freeze dried food at the cabin again.  I tried to catch some fish in the lake to eat, but no luck.

9/17/21: Day Nine: Repeat performance of Day Eight. Called in the camp bull again and then went up river where we drew a blank.  Gorgeous valley, but no moose this day. 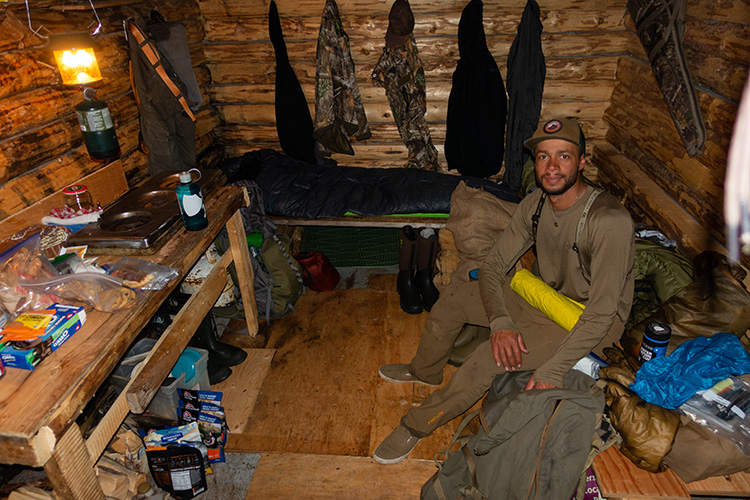 This 12 x 14 foot cabin felt like a luxury hotel room after sleeping on the cold mountain for five days. It was our home during the moose hunt.

9/18/21: Day Ten: Our last day. Ron would be there to take us out in the early afternoon.  We tried calling again from close to camp, but nothing responded this day, not even the camp bull who we had come to call “Little Buddy”.  Ron arrived and took us out one at a time.  His float plane can handle about 400 pounds of cargo (which includes the passenger) so it is a slow process. Eventually we made it back to the main lodge and enjoyed a big dinner and the first shower in 10 days! 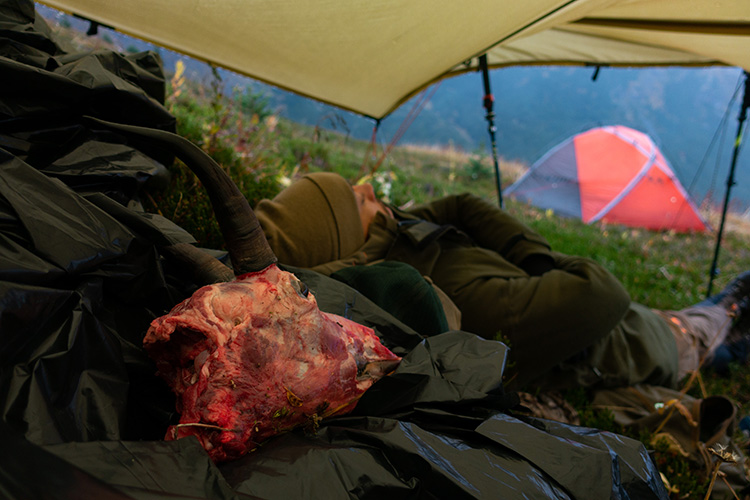 The whole experience was a great adventure. You don’t realize how much you take for granted until you find yourself 150 miles into the wilderness!

It is gorgeous and very rugged.  This area is super remote and the margin for error in judgment is small.  A mistake can quickly become fatal.  We did use In-Reach handheld satellite responders to get emails out to the main lodge when needed, so we weren’t completely cut off.

However, this is not the place for people who like comfort.  The nights were chilly and the days often a mix of rain and snow, some overcast and the occasional ray of sun. 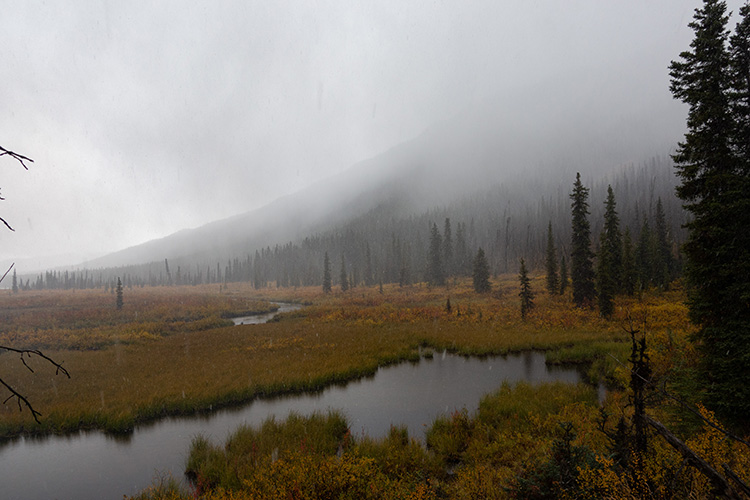 Every cloud comes through the mountains with its own micro-climate. This one brought a heavy snow squall that lasted 30 minutes. The weather changed five times each day.

Every cloud comes with its own micro-climate as it rolls through and around the mountains.  The weather literally changed five times per day.  I lost about ten pounds in ten days from the combination of effort and staying warm in chilly temps without the right gear.

If I do this again, and I fully intend to, I will have the right equipment for the task. I do plan to hunt moose with Ron in the coming years, maybe next year.

A PREVIEW OF PART TWO

In Part Two I will get into the adventures we had during the next 11 days around the main lodge, which included a rogue grizzly the tore the wall off a building, some float plane trouble and a few really big bull trout by fly rod. Look for Part Two very soon.