BEST DAY OF THE RUT

I shot this buck on what has come be one of my favorite days of the year for bowhunting the rut, November 7th. I was hunting a new property that I had just purchased part ownership of.  It was 3,600 acres in size, and though I couldn’t afford more than 1/28 of it (and that being mostly paid for by a loan), I was there and hunting it. 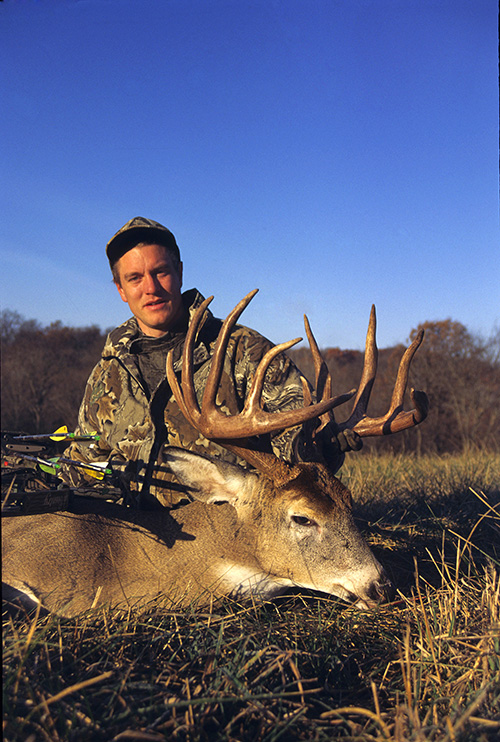 This was the first really big deer that I ever killed. I shot him on November 7, 1995 on a farm I had just recently acquired part ownership. The day I killed this buck has become my favorite day of the season to bowhunt whitetails.

You can read bit more about that stage of my hunting land ownership in Chapter One of the Dream Farm Series.

The stand was in a long finger of trees that led away from a large block of timber and a creek to the south and connected it with a big area of crop fields and CRP to the north.  Bucks traveled that finger non-stop during the rut.

While hunting about 150 yards to the north, I had seen this buck a couple days earlier as he came out of the finger near the spot where I now had placed my stand and started to head across the open field to the east. I grunted at him and he started my way only to hit my ground scent in the long grass where I had approached my stand.

He snorted and spun but didn’t seem too distressed so I came back and placed the stand where it appears on the map in included.

November 7th, 1995 was very cool and crisp with a heavy frost and still air. It was a classic rut morning.

Somewhat before legal shooting time, I glimpsed the form of a big bodied buck running along the west side of the narrow part of the finger where I now sat. He was heading north.  About fifteen minutes after shooting time began, I heard a low grunt, snapping twigs and crunching leaves coming from the north, but now right in the middle of the finger of cover, heading directly toward my stand.

The big-bodied buck was chasing a smaller buck away from a doe as the three of them came my way at a fast walk. I will never forget the look of those chocolate brown antlers as the buck came forward with head down, straight toward the tree.

Right at the base of the tree, they all three turned and headed to the east, out into the field on that side. My stand also hugged that field, being just five yards into the cover on that side. 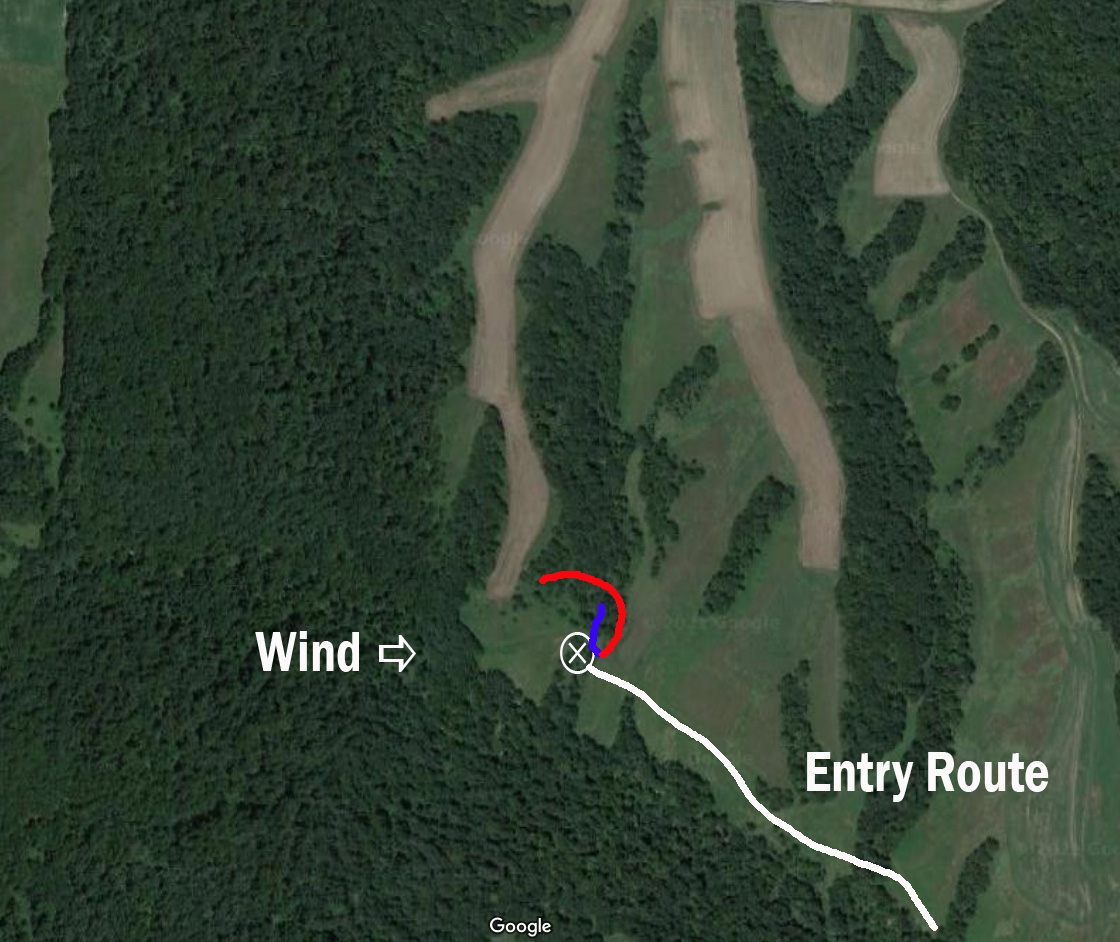 The white line is the route I took to get to the stand that morning (with a light west wind forecast) and the blue line is the path of the buck as he followed a doe and a smaller buck right to the base of the tree and then out into the field to the east where I got the shot. These long fingers of cover are classic buck highways during the rut.

I am sure the buck smelled my scent again, as he literally walked out into the field on the path I had used only 40 minutes earlier to reach the stand.

But, he didn’t blow out. Likely the distraction of that doe and the other buck held his attention and kept him from bolting.

Instead, he slowly walked out into the field on stiff legs and offered an easy 15 yard quartering away shot.  I heard the hollow sound of the big aluminum arrow hitting is lungs and then he mule kicked and busted to the north along the edge of the trees before going out of sight.

When I climbed down an hour later, I found him easily where he had fallen on the other side of the timbered finger.

First, that hunt started a life-long love affair with November 7.  Over the years that date has hosted more great hunts for me and my friends than any other single day on calendar.  I still think that when the weather is cool, November 7 is the best day of the season, on average.

Second, I learned the value of hunting these travel route bottleneck funnels during the rut. Interesting, there is almost no buck sign and zero trail along this finger of timber at other times of the year, but it lights up with sign once the rut arrives.

Bucks naturally orient to this kind of linear cover when travelling and hunting for does during the rut, and a narrow spot along such a route is sure-thing killer stand. This spot became just that.  You will see this spot a few more times before this Bowkill Series is over as I killed at least two others here, not to mention the fact that my friends who often hunted the same stand also had great hunts from this spot.