Now, for the first time in my life, I am actually selling hunting land.

At this point in the story, we have 960 acres and have recently sold the mature marketable timber off two of them that I had purchased for investment.

The challenge I now face is to sell those two properties as quickly as possible and roll that equity into 400 acres next to the Home Farm.  I have an expiring option to buy the 400 acres – so the clock is ticking.

Additionally, each month that the process drags out, the cost to execute the option goes up.

I have the cash from the timber sales on both properties in the bank awaiting this next purchase, but I have to get these properties sold as quickly as I can.

I need to close on both sales at more or less the same time so I can roll the equity from both properties into the 400 acre option in the same transaction. 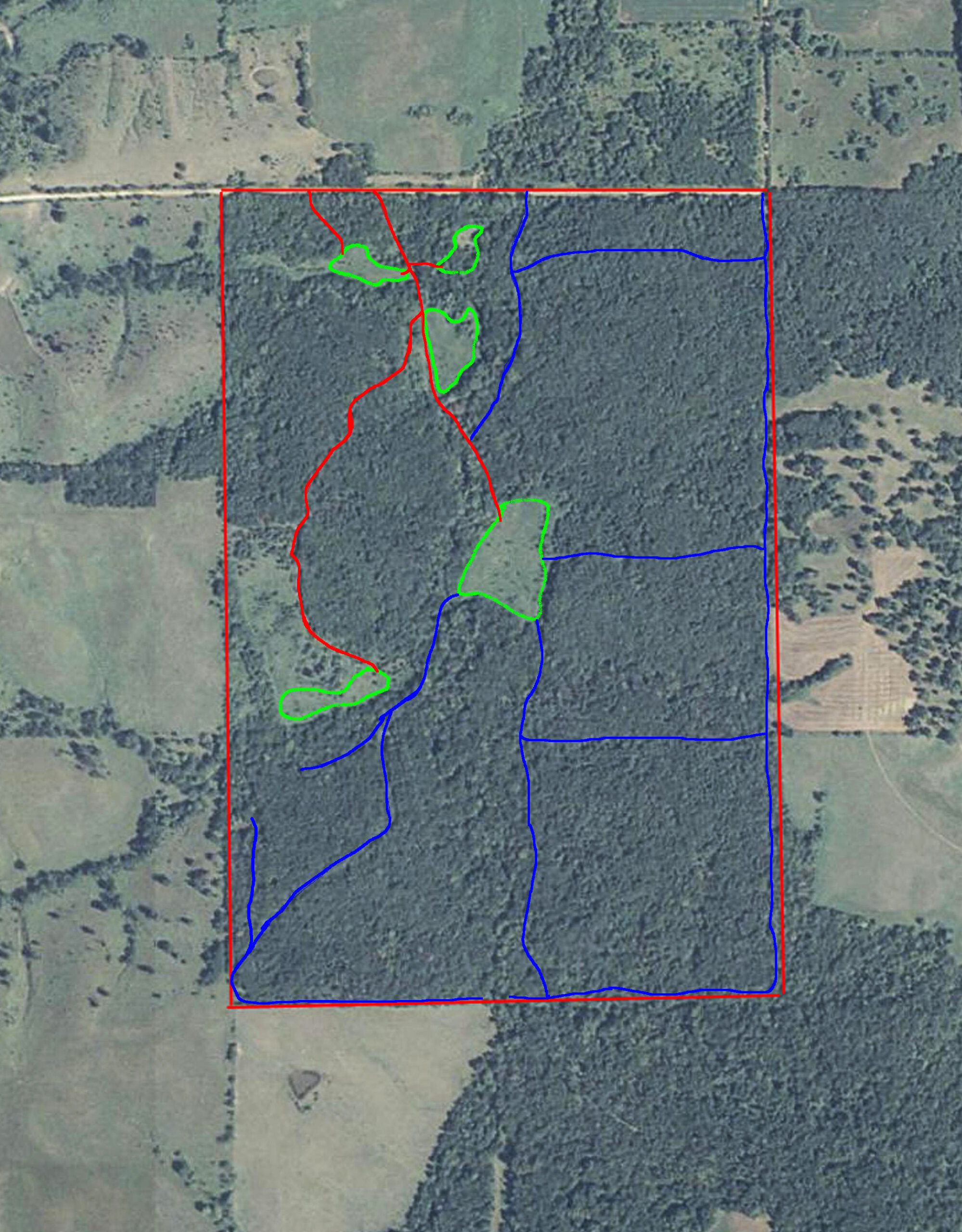 By the time I put the 240 acre tract on the market, I had created a nice network of trails and several food plots. With a creek running right down the middle, it was as nice a layout as I have had on any land I owned. I could have hunted that tract forever and never gotten tired of it.

I had spent a lot of time with Rich Baugh, a Whitetail Properties agent, over the years.  Rich is a great realtor, very honest and knowledgeable.  Naturally, I listed the 240-acre tract with Rich.

As I mentioned, this was a gorgeous piece of land that I had made better by building and clearing food plots and creating a skeletal trail system.

The property was located deep down a dirt road, so I had also put in some frontage fences and gates to make the access more secure and private.

Though it produced some income, in a very real way, the timber cutting had improved the habitat potential of the property by opening up the canopy.  I could already see the improvement that very first summer.

Finally, as a last step toward getting the property ready to sell, I started running trail cameras in October.

Immediately I began getting photos of a giant 200-inch buck that was sometimes daylight active.

I probably should have hunted him during the fall of 2007 because I am pretty sure I would have had a crack at him, but I decided to leave the buck for the next guy.

A photo of a live 200 incher is the purest form of marketing for any piece of hunting land.

Rich loved that photo, of course. Bucks that size are attention grabbers, and to know they are still alive is good for sales!

That 240 acres was a diamond in the rough when I bought it, but now the rough was gone. This baby had become a buffed out, cleaned up sparkling diamond.

The first person that looked at the property wanted it, but he also wanted more land to go with it. He said that if I had the 240-acre pasture he would buy the entire thing and pay top dollar. Talk is cheap, but dang it, I knew I should have bought that pasture.

I called the people who had bought that pasture and asked them if they wanted to sell it to this fellow at a nice profit, but they said no.  They wanted to keep it and hunt it. 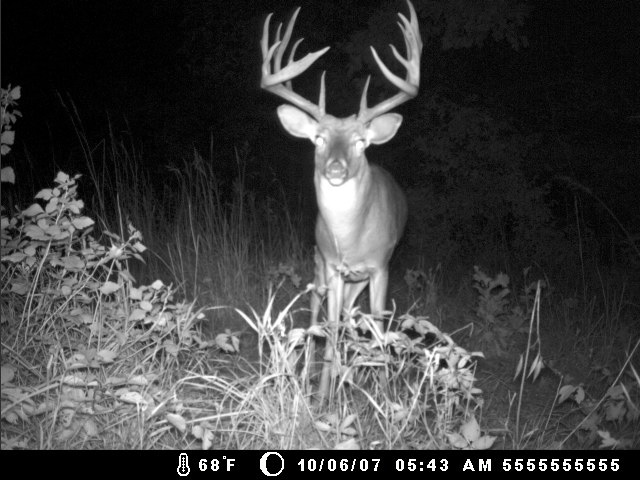 I was getting photos of this giant buck very regularly during the fall of 2007, some photos in daylight. I didn’t hunt him, but elected to save him for the next owner of the farm.

Obviously, hindsight is 20/20, but I sure left a lot of money on the table on that one by not buying that rough pastureland at a cheap price when I had it in my lap.

The second person that Rich showed it to made me an offer, but it was an interesting one. He offered $1,950 per acre contingent on my getting the two miles of through road closed that bordered the property on the north side.

Even though it was a level B dirt road, I knew that closing a through road would not be easy.

With that in mind, I countered, and we went back and forth a few times before finally settling at around $2,250 per acre.

But and this is a big but, I had to get that road closed!  Oh boy, what had I gotten myself into now!

You don’t just close through roads. I had never heard of it happening in rural Iowa.  The process involved getting the road reclassified as Level C which makes it a private road that you can gate.  I knew how hard this was going to be.

Holding out hope, I called the county supervisors office and spoke with someone about it.  I then attended their next meeting to plead my case.

The county supervisors didn’t like that road one bit. It was dirt, and dirt roads always get torn up after every rain by anyone with a 4 X 4 and a sense of mischief and adventure.  That meant tons of maintenance for the county.

Also, that road had two bridges with the liability that goes along with bridges.  They can be very expensive to replace if they wash out or wear out. Plus, bridges seem to always attract troublemakers.

The supervisors were more than happy to get that road off their maintenance list, but to do that I had to provide them with signatures from every landowner who bordered the two mile stretch of road.

Fortunately, there were only four of us. I decided to save the hardest ones for last.

A family trust owned a big chunk of the road frontage and they were absentee landowners – that means they didn’t live on the property.

I hoped they would see closing the road as a positive that increased the value of their large tract.  Not living nearby, the security of gating the road seemed a possible attraction.

Once I identified and tracked down the trustee, I set an appointment to meet with him and got that signature easily enough.

Counting myself, that was two down and two to go.  This might actually happen.

It was much easier to approach the next owner by telling him that his long-time neighbor also wanted it closed and had already signed the petition, which I showed him. He signed it immediately. Three down, one to go.

This fourth neighbor was a tough nut. He was also an absentee landowner who was a bit rougher around the edges.

He had about 100 acres, or so.  His daughter kept a few horses there and liked to ride them. 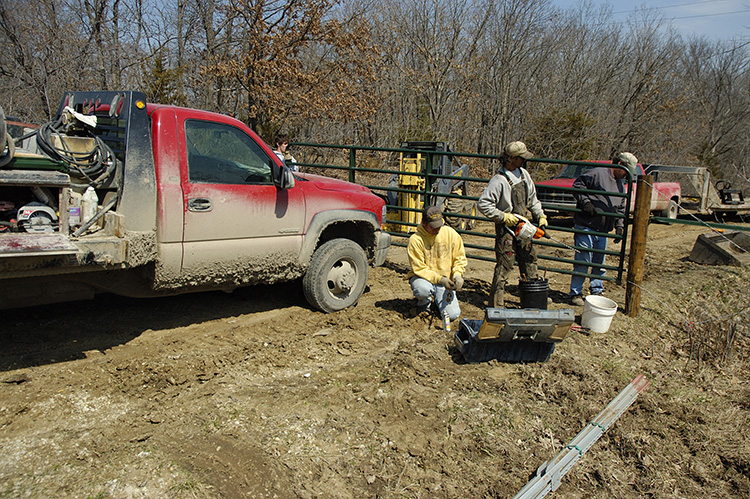 Once I got the county board of supervisors to sign off on reclassifying the road, I immediately hired a crew to build gates on both ends.

There was an old gate between his property and mine and he said he would sign the petition as long as his daughter could go through that gate and ride horses on my 240 acres.

She had been doing this for years prior to my buying it. I agreed as long as she didn’t ride there past September 1.  I felt that the buyer of my 240 would honor that request and we shook hands, and I got the signature.

I immediately swung by the county courthouse and delivered a copy of the fully signed petition to the secretary.  I was told to be at the next board meeting when the petition for closure would be on the agenda. 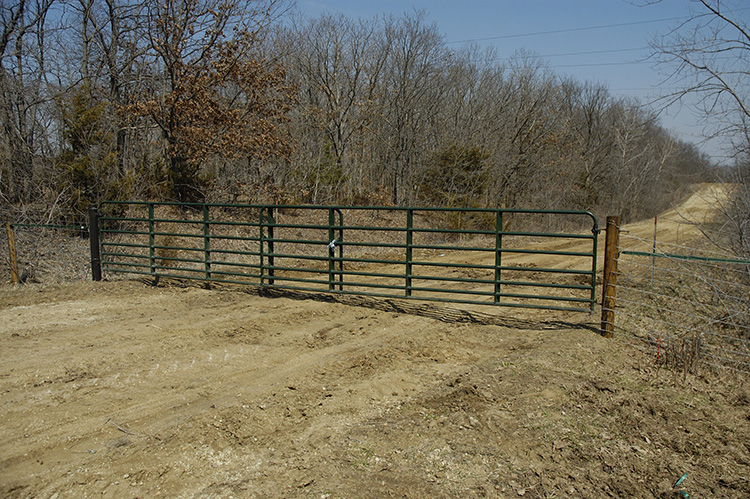 A sight for sore eyes. After months of hard work, I finally had the 240 acre property ready to sell, complete with closing the dirt road that bordered it on the north side.

The board was required, as matter of law, to post the upcoming reclassification of the road in the local newspaper.

Anyone who wanted to oppose it was invited to the meeting to voice their position.  I didn’t know what to expect when I arrived at the meeting.

Like I said, the board wanted that road closed almost as much as I did, so it was the first item on the agenda.

When the action was brought up, no one opposed it and the motion was made, seconded and voted (all aye) faster than I imagined possible.  They all smiled and told me that I could put the gates up immediately!

Ten minutes after the meeting started, I was in my truck heading home with a huge weight off my shoulders. 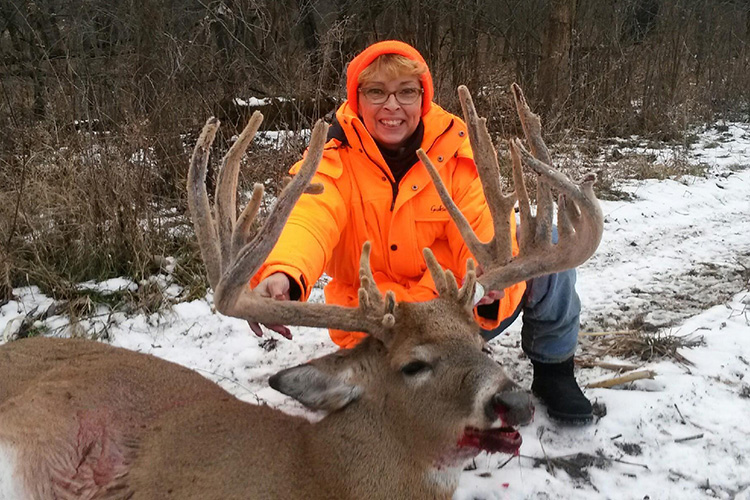 A husband and wife bought the 240 acres from me. Lyla shot this ridiculously large freak buck a few years after they acquired the farm. I am not sure if it was on the 240 or right across the dirt road. (They had also purchased some of the neighboring land during the first few years after buying mine).

My first call was to Rich Baugh and my second call was to the neighbor near my home who had done all the trail construction work and fence/gate building on the property.

They reacted quickly and within a few days we had the gates in place – blocking both ends of the two-mile road!

As an interesting side note, Mark Drury asked permission to turkey hunt the property, which I granted.  He took PSE Archery founder and industry legend, Pete Shepley, there to hunt.  That farm is where Pete shot his first ever turkey with a bow!

It was now April of 2008, and the property was ready for the final sale closing. That went smoothly and I remain friends to this day with the husband and wife who bought it.

They never saw that big 200 incher I left for them, but the wife did kill a huge freakish velvet antlered 220+-inch non-typical a few years later.  I know it wasn’t the same deer.  Boy, what a property!

Now, I have sold the 240 acres and have identified the 400 acres that Larry Kendall owned as the replacement for my 1031 tax exchange.

Under tax code, I have 180 days (from the close of the farm I sold) to purchase the replacement.  I need to get that island sold so I can keep this thing going!

Again, this story has enough twists and turns that I need to move on to another chapter. I sure hope I can get this wrapped up soon.  You can read Part Six here.