It is time for me to be selling an island.

To keep up with this winding journey, it is spring of 2008. I have sold the 240-acre timbered tract and still need to sell the 160-acre island so I can purchase 400 acres next to the Home Farm.

I now have just under a year left in my option to buy 400 acres next to the Home Farm from friend Larry Kendall.

Due to the built-in price increases and the desire to use a 1031 tax exchange with the proceeds from the sale of the 240 acres I recently sold (you only get 180 days to close on the next purchase) the clock is now ticking loudly.

Each month delay not only makes the 400-acre farm more expensive, but it also takes me that much closer to my 1031 tax exchange deadline.

If I miss that deadline, I will have to pay the capital gains tax on the sale of the 240 acres.

As soon as I signed that option with Larry Kendall during the summer of 2007, I knew I would need to put the island on the market as soon as I finished taking the logs off.

There was a problem, however.  Remember when I said in Part Three that the pawn broker that sold me the island had kept exclusive hunting rights for three years?  He was a shrewd one, for sure.  Smarter than me. 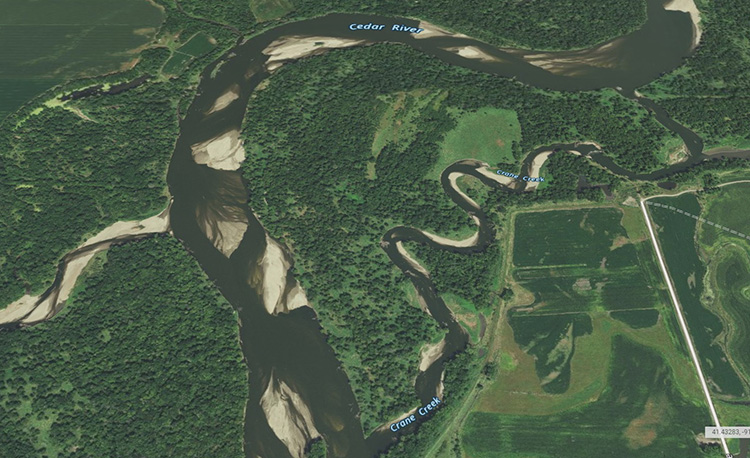 I really did like that Island, but I fear that will be the case with every piece of land I own. I never want to sell any of it. But, selling the island gave me the much needed capital to purchase 400 acres next to the Home Farm.

He knew that when I went to resell it, a prospect he assumed might happen soon, that I would be selling it to a hunter. He also knew that no hunter would want to buy that if they didn’t have hunting rights.

I didn’t worry about it at the time of purchase because I had big plans to convert the open wetland portion of the island into a waterfowl hunting paradise and then resell it.

I was really looking forward to developing a blue-ribbon wetland and I knew that would take time.  I figured I would be holding this one for a few years until that work was done.

I never expected to sell it so quickly, but when that 400 acres near the Home Farm came up for sale, everything changed.

During the early winter of 2007, before I even had the logs off the island, I showed up at the pawn shop with an offer to buy out the remaining two years of hunting rights.

The shop owner grinned at me like a cat that had just eaten a canary and we sat down to negotiate.

He ended up being reasonable when I suppose he could have held my feet to the fire.

I wrote him a check for $10,000, he signed off on the hunting rights and I walked out of the shop, feeling a bit silly for getting trapped into that deal.

Now, fast forward to mid-spring of 2008. Two significant events have occurred at my island.

First, the logs are off and I have a nice crossing built to access the island.

Second, the weather pattern has turned rainy, the first stages of a stretch of weather that eventually turned the Cedar River into a raging torrent.

Before the rains ended sometime in late April, the Cedar River was carrying more water right down the center of Iowa than the mighty Mississippi normally carries in a typical year.

It was a massive area of flooding the likes of which central Iowa had never seen – a historic flood – rolling right over my island!

Prior to the time when the bulk of the flooding hit, I listed the island for sale.  I initially took it to Rich Baugh, but he passed the listing along to a new agent that had just started with Whitetail Properties in that area.

This was almost fatal to my deal as the young agent had never sold a property before and I needed this to go smoothly. It didn’t!

The first two guys that the agent showed the island to wanted to buy it. They had hunted nearby on the Cedar and knew its potential for good deer.

The crossing was still above water and they drove right out there and immediately loved the seclusion and potential for planting food plots to turn the place into an island mecca. 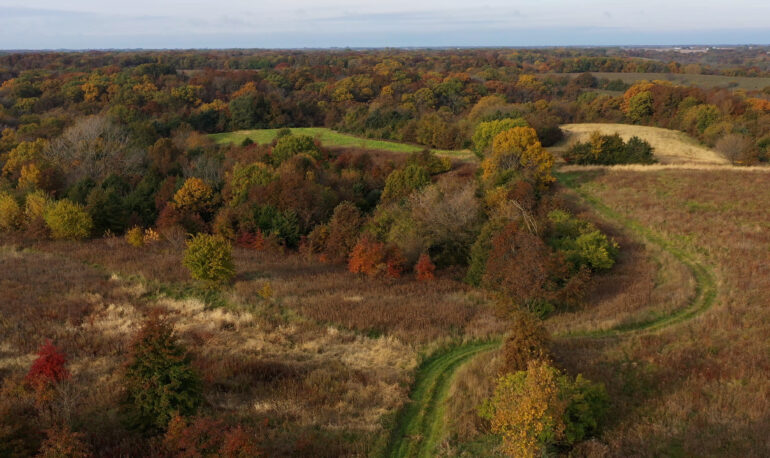 The 400 acres was itself a Dream Farm. It had tons of cover, plenty of terrain features and lots of tucked away spots for food plots.

Those two guys made an offer and we worked through four rounds of negotiations quickly. I might have been easy on them since I wanted to get this done without delay, but we settled on $1,750 per acre.

It was more than I had paid for it ($1,500 per acre), and since I had taken a good bit of timber value off, I felt that it was a fair price even though I did have a lot invested in the crossing and had made the property better with the permanent access easement.

Here is where it gets interesting. The offer was contingent upon financing.

I hate contingencies when selling land, but often they can’t be helped.  I had bought a good bit of it contingent on financing myself, so I went along with it.

The key to closing a property with contingencies is to clear those contingencies as quickly as possible so the deal can keep moving.

Unfortunately, the guys were slow in getting their credit letter and the junior realtor didn’t understand the significance of delays in these kinds of deals.

He did not push them hard enough on this simple step and soon the rains came.  The river was out of its banks and the entire island was under water.

I started getting nervous as I considered the likelihood of closing the sale on a property while it was under six feet of water! Yes, I had their earnest money, but I needed more than that.

I needed this to close so I could buy the 400 acres.

I got Rich involved. Realtors have to walk a fine line when deciding how hard they can push, but nearly every deal eventually has a point where the realtor has to take control to get it done.

An inexperienced realtor can misjudge the significance of each part of the deal and that can lead to a failed closing.

Rich stepped in and made it happen. 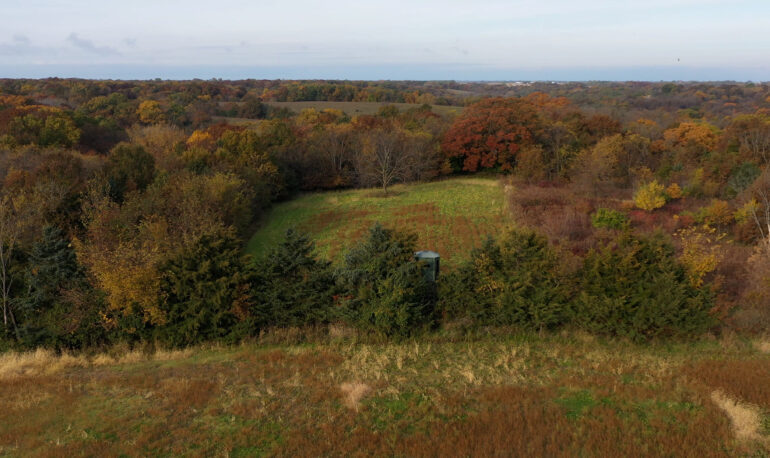 The best stand site I have ever hunted is on the 400 acres. Our family has taken at least six mature bucks from this Redneck blind. There are many reasons it is so great – adjacent to bedding and easy undetected entry and exit are the main ones.

It was easy to swing the rest of this deal. Larry and I decided to dissolve the land investment partnership at this point, and he paid me off based on what we agreed was a likely conservative profit for the farms we had bought with his money.

I did the 1031 tax exchange with the sale of the two outlying properties (the 240 and the island) and further used the proceeds from the timber sales on both properties to fill in the gaps.

I can’t remember if I had to borrow money on this one or not. I somehow don’t think I did.

So, I had been able to turn 40 acres of cropland that I sold on the original farm, and $60,000 of timber money also from that property, into 400 acres of new ground over the course of about 18 months.

I explained the deal to a friend once who said, “Why don’t you keep doing that?” I just shook my head.  That deal was once in a lifetime.

So many moving parts had to all fit together.  Surely, it was a gift from God, as I have already noted.  There is no repeating a deal like that!

SIDE NOTE ABOUT THE ISLAND

I think it is just as interesting what the two buyers did with the island as what I did with it.

After the big flood of 2008, FEMA had to bail out so many disaster areas along the Cedar River that the agency determined it was actually cheaper for them, in the long run, to just buy easements on as much of the flood plain as possible.

The easement basically was a one-time payment that purchased all development rights to the land.  However, the original owner got to keep the land.

Read that carefully: through a conservancy group, the government bought up all development rights on as many properties along the Cedar River as possible.

Anyone that sold their development rights could never build on the property.

The guys that bought my island sold their development rights for $2,300 per acre! So, they bought it from me, sold off something of zero value for an island (no one in their right mind would build on that island) and still owned it!

Wow, kind of made me wish I had been able to keep it and then turn it into that blue ribbon waterfowl area. But I did get the 400 acres by the Home Farm so I wasn’t losing sleep over it.  Amazing!

After completing the purchase of the 400 acres, I needed to take a break and absorb all this before deciding what to do next.

I didn’t purchase any additional bigger blocks of land though there were some available over the years.

I did, however, pick up a couple of smaller parcels just to clean up the boundary. I think those added up to around 40 additional acres. I was done buying – the Dream Farm was finally complete.

I am still not done with this series. There is one chapter remaining.  You can read Part Seven here.