Some bucks are born to be nocturnal while others are born to be daylight active. I have seen this in many bucks I have hunted, but none more so than a buck I nicknamed “Big”. Truthfully, his name was actually “Big $%_@!” but I had to leave that last part out when relating to the sensitive public. 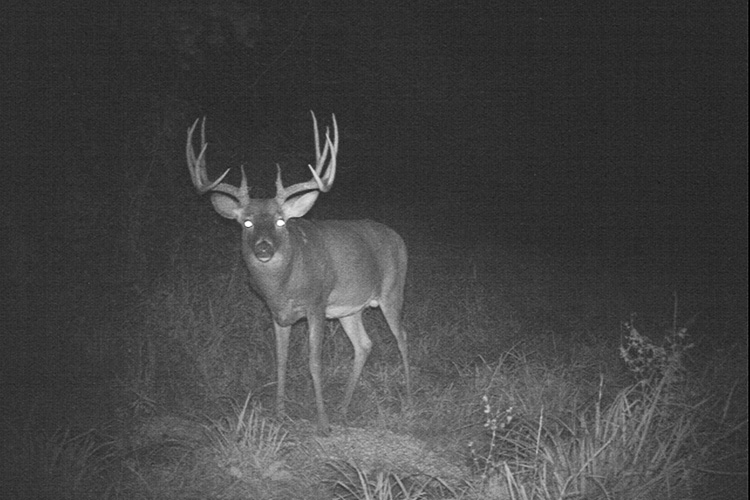 This is the buck I nicknamed “Big” in 2010. He was five years old at that the time and was completely nocturnal. I hunted him hard all season but never saw him and never got a single daylight photo of him that year.

Big came up through the ranks at the same time as Loppy and G4 with the notable exception that he got hit by a car during the fall/winter of 2011. That was disappointing to be sure, because at his largest (in 2010), he was pushing 190 inches as a 5 year old.

Big’s personality evolved in much the same way as G4. He was nocturnal even as a young buck. I got hundreds of photos of him in 2008 when he was a 3 year old, but every single one was at night.

]That year we saw him once in daylight. We saw him twice in daylight in 2009 – once when a hot doe pulled him out on November 5 and again in January when snow and cold compelled him to feed early one evening. No daylight photos that year either.

Though I hunted Big relentlessly (but, I think carefully) in 2010, when he was a true giant, I never saw him once. Again, no daylight photos on any of my cameras, though I got hundreds of nighttime photos of the deer.

I think Big was born nocturnal. He didn’t learn that tendency because we didn’t pressure him hard on the farm. Even as a youngster, Big was nocturnal. 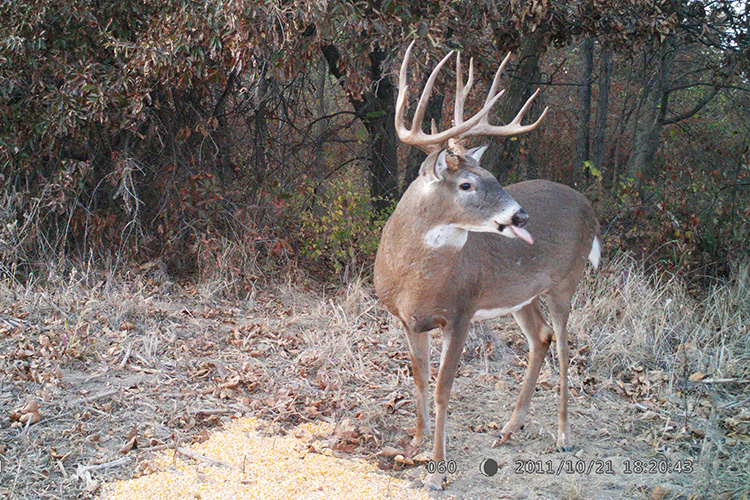 In 2011, the buck named Big was very daylight active. Just one year after being what I would consider totally nocturnal, he had become one of the most visible deer on the farm. Unfortunately, his antlers had gotten smaller for some reason so I decided not to hunt him that year. As things go, he got hit by a car later in the fall.

But here is what is interesting about this deer: in 2011, when Big was six years old, he was all over the place in daylight. Every camera in his range was getting daylight photos of him. Unfortunately, his antlers had slipped for some reason (maybe he got sick the previous winter, I don’t know) and he likely would have scored at least 30 inches less than the year before.

Though his rack got smaller, he looked healthy so I decided to let him go in 2011 to see if his rack would straighten back out the next year. Of course, he got hit by a car later that fall.

I think killing him in 2011 would have been a piece of cake. I probably could have done it one day in late October while checking cameras. I went in at noon to pull the card and there was old Big making a scrape not 20 yards from the camera. He never even looked my way as I stopped short, dropped to the ground and snuck back out.

I sure wish he would have lived another year. He would have been fun to hunt. We can take at least two points from Big’s story. 1. Some bucks are born to be nocturnal. 2. Most bucks become daylight active when they get old.

CONTRASTING BIG AND THE G5 BUCK 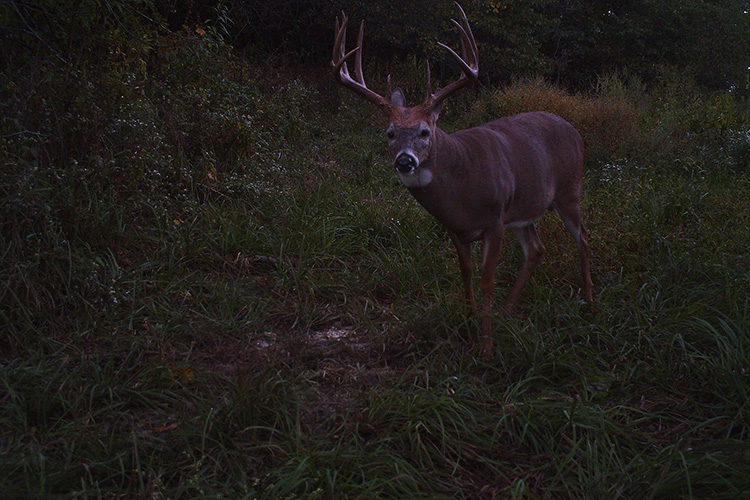 Compared to “Big”, the buck I called “G5” was a very daylight active deer as a four year old. I ended up shooting him that November. He never acquired nocturnal habits at any age during the four years he lived on the farm.

Now, I am going to contrast Big’s life with that of another big buck that lived on the farm at roughly the same time. I nicknamed this one G5 (another creative name). He was very, very daylight active as a young buck.

These two bucks with completely different personalities (along with others I have hunted) have caused me to think that nocturnal behavior is both learned (from heavy hunting pressure) and a product of their individual personality.

In areas with heavy hunting pressure, you end up with only nocturnal 3-year-old bucks for both of these reasons.

The bucks get educated quickly when younger (causing them to become nocturnal) and the daylight active bucks simply get shot when they are 2 years old.  So, the result is a population of nocturnal bucks by age three.

In less pressured areas, you can actually see bucks of most ages moving during the day, with the greatest likelihood being when they are young or old.  The middle aged bucks (ages four and five) tend to be the least visible, in my experience. Surprisingly, as I mentioned in the blog about bucks getting easier as they get older, the most mature bucks seem to revert heavily to daylight activity. 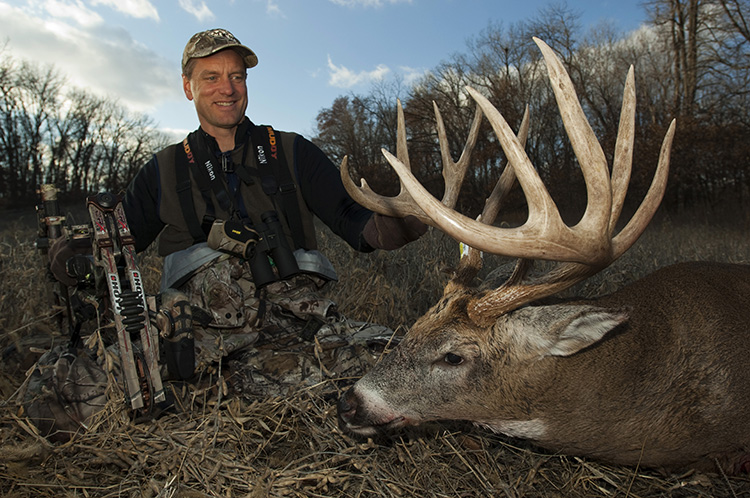 This is the G5 Buck. He surely would have been killed when he was two or three years old in any area with hunting pressure. He was very visible and would have scored around 135+ inches at two and pushing 170 at three. I shot him as a four year old – he never showed a real tendency to nocturnal.

So you may think that some hunters (me, for example) have a secret method for killing big deer. In reality, we just get to hunt bucks that are easier to kill.

Not only do they tend to get easier as they get old, but the ones with daylight roaming tendencies aren’t killed when they are young. That’s a double bonus.

I realize there is a lot in this blog to absorb, but even at that, I had to cut it short. There are many other lessons I have learned from these multi-year quests. I will have to save those lessons for another day.

I am blessed by my situation. I get to hunt old bucks every year. Be realistic. If you are hunting areas with heavy hunting pressure, you may never see these behaviors in the bucks you hunt.

Whitetails are fascinating, but if you pursue just one buck long enough you realize that there is nothing truly mystical about them.

That doesn’t diminish the thrill of the hunt. If anything, it makes the hunt even richer as you get the privilege of learning each buck’s individual behavior. That is a lot of fun and extremely educational.